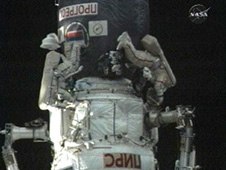 The Exposing Specimens of Organic and Biological Materials to Open Space (Expose-R) experiment was installed on the universal science platform mounted to the exterior of the Zvezda Service Module.

The spacewalkers also removed straps, or tape, from the area of the docking target on the Pirs airlock and docking compartment. The tape was removed to ensure it does not get in the way during the arrival of visiting Soyuz or Progress spacecraft.

Fincke and Lonchakov later took photos of the exterior of the Russian portion of the station to document its condition after a decade of operation in the harsh environment of space. The photos will be used to assess the condition of the outer surfaces and structural elements of the station, including active components such as thrusters and vents.

Tuesday's excursion was the 120th spacewalk in support of space station assembly and maintenance.

Fincke and Lonchakov will return to Earth April 7 in their Soyuz TMA-13 spacecraft now docked to the station. They have been aboard the orbiting laboratory since October 2008.
› Back To Top