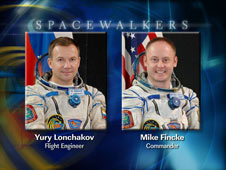 They also took photos. The spacewalk, in Russian Orlan spacesuits from the station's Pirs docking compartment, began at 7:51 p.m. Monday.

Lonchakov and Fincke worked together to install the electromagnetic energy measuring device, called a Langmuir probe, on Pirs. Measurements of electromagnetic energy could be helpful in the investigation of its effects on pyrotechnical separation bolts on Soyuz spacecraft. The bolts are suspects in the investigation of ballistic – steeper than normal -- entries of the Expedition 15 and Expedition 16 Soyuz spacecraft.

Fincke removed the Russian Biorisk long-duration experiment, which exposes biological samples to space, from outside Pirs and with Lonchakov put it inside the airlock. 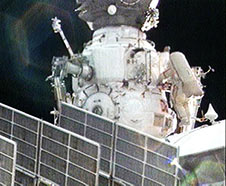 Lonchakov and Fincke also installed the Impulse experiment, which measures disturbances in the ionosphere around the station. Both worked to mate cables for Expose-R and Impulse, mounted on the same external platform as Expose-R. They succeeded after struggling with some balky connectors.

However, Mission Control Moscow did not receive telemetry from Expose-R. Managers there decided that the spacewalkers should dismount that experiment and return it to the airlock for eventual return to Earth. Flight controllers reported the Impulse experiment was functioning well.

After inspecting the spacesuits they returned to Pirs. They re-entered the airlock, and closing its hatch marked the spacewalk's end.
› Back To Top