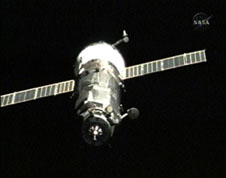 Image above: A view of the Progress 29 cargo carrier as it approaches the International Space Station for docking. Photo Credit: NASA TV

The station's 29th Progress unpiloted spacecraft brings to the orbiting laboratory more than 770 pounds of propellant, more than 100 pounds of oxygen and air, about 925 pounds of water and 2,850 pounds of dry cargo. Total cargo weight is 4,657 pounds.

P29 launched from the Baikonur Cosmodrome in Kazakhstan on Wednesday, May 14, at 4:22 p.m. It replaces the trash-filled P28 which was undocked from Pirs on April 7 and destroyed on re-entry.

P29 used the automated Kurs system to dock to the station. Expedition 17 Commander Sergei Volkov was at the manual TORU docking system controls, should his intervention have become necessary.

Once Expedition 17 crew members have unloaded the cargo, P29 will be filled with trash and station discards. It will be undocked from the station and like its predecessors deorbited to burn in the Earth's atmosphere.

But the second of the three Progress sections is a refueling module, and the third, uppermost as the Progress sits on the launch pad, is a cargo module. On the Soyuz, the descent module, where the crew is seated on launch and which returns them to Earth, is the middle module and the third is called the orbital module.