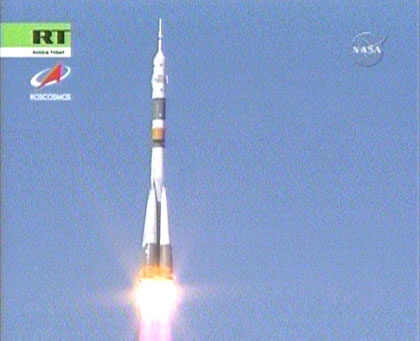 Image above: Expedition 17 launches aboard a Soyuz rocket from Kazakhstan. Credit: NASA TV

Commander Sergei Alexandrovich Volkov and cosmonaut Oleg Dmitrievich Kononenko of the 17th International Space Station crew launched in their Soyuz TMA-12 from the Baikonur Cosmodrome in Kazakhstan at 7:16 a.m. EDT Tuesday to begin a six-month stay in space.

Less than 10 minutes after launch their spacecraft reached orbit, and its antennas and solar arrays were deployed shortly afterwards.

With Volkov, a lieutenant colonel in the Russian Air Force, and Kononenko is spaceflight participant So-yeon Yi. She is a South Korean flying under contract with the Russian Federal Space Agency.

Yi will return to Earth with Expedition 16 crew members, Commander Peggy Whitson and Flight Engineer Yuri Malenchenko in their Soyuz TMA-11 on April 19. Expedition 16 launched to the station Oct. 10.

Expedition 17 crew members will be welcomed by the Expedition 16 crew, including astronaut Garrett Reisman, after their docking to the orbiting laboratory, scheduled for Thursday. Reisman launched to the station on the STS-123 mission of Endeavour March 11. He joined Expedition 16 in progress and will provide Expedition 17 with an experienced flight engineer for the first part of its increment.

Volkov, 35, is making his first flight into space. He is a graduate of the Tambov Air Force Academy for Pilots. After service as an air force pilot he began cosmonaut training in December 1997. He trained with the Expedition 11 crew and as a backup Expedition 13 crew member. He is the son of cosmonaut Alexander Volkov, who flew three long-duration missions in Soviet and Russian space stations from 1985 to 1992.

Kononenko, 43, also is making his first spaceflight. He is a graduate of the Aviation Institute and worked at the Russian Space Agency's Central Specialized Design Bureau. He began cosmonaut training in June 1996. He trained with the Expedition 9 and Expedition 11 crews.

Astronaut Greg Chamitoff is scheduled to launch on the STS-124 flight of Discovery to join Expedition 17 in progress. He holds a Ph.D. in aeronautics and astronautics from Massachusetts Institute of Technology. He was selected as an astronaut for the class of 1998. He will be making his first spaceflight.

Two Expedition 18 crew members are expected to arrive next fall to replace Volkov and Kononenko.
› Back To Top