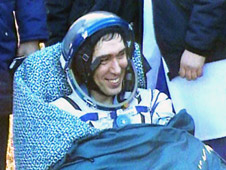 All three people aboard the Soyuz TMA-12 spacecraft were reported to be in good condition after their re-entry and landing.

A Russian recovery team and NASA personnel reached the landing site by helicopter shortly after the Soyuz touched down. They helped the crew members into reclining chairs for medical tests and set up a medical tent nearby.

With Volkov and Kononenko was spaceflight participant Richard Garriott. He launched to the station Oct. 12 with the Expedition 18 crew, Commander Mike Fincke and Flight Engineer Yury Lonchakov, under contract with the Russian Federal Space Agency.

Astronaut Gregory Chamitoff came to the station aboard Discovery on its STS-124 mission, launched May 31. He served for the last part of Expedition 17 as a flight engineer. He remains aboard the station as a member of the Expedition 18 crew.

Expedition 17 crew members undocked their Soyuz spacecraft from the station at 8:16 p.m. Thursday. The deorbit burn to slow the Soyuz and begin its descent toward the Earth took place at 10:45 p.m.

When they landed, Volkov and Kononenko had spent 199 days in space on their Expedition 17 flight, 197 of them on the station.