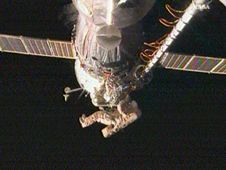 The spacewalk comes in the wake of ballistic entries by the two most recent Soyuz spacecraft, entries that while safe resulted in high-G rides for the crews and landings hundreds of miles short of the planned recovery area. Russian engineers say they have evidence that failed explosive bolts that help separate two modules likely are responsible.

The spacewalk, the 113th for assembly and maintenance of the station, focused on the area between the Soyuz return and propulsion modules.

Volkov and Kononenko left the Pirs docking compartment and moved to the Strela hand-powered crane mounted nearby. Volkov, wearing the red-striped Orlan spacesuit and designated EV1 or lead spacewalker, and Kononenko mounted a foot restraint on the end of Strela.

Kononenko, EV2 in the blue-striped suit, was unable to secure himself to the foot restraint, so he tethered himself to Strela and held on. Volkov maneuvered him to the Soyuz docked to the Earth-facing port on Pirs.

After taking photos and installing covers to protect nearby thrusters, Kononenko cut and secured insulation and inspected the area behind it. Then Volkov moved along the Strela to join Kononenko.

They demated electrical connectors and cut a wire tie between adjacent pyro bolts in the suspect position. Volkov unscrewed and retrieved one of the pyro bolts there. With help from Kononenko he stowed it in a protective blast-proof cylindrical case. The spacewalkers installed a thermal blanket over their work area and took photos of the site.

Kononenko and Volkov moved back to the Strela controls and maneuvered the crane back to its stowage position on Pirs. They stowed a bag with the container holding the pyro bolt in the airlock. It will be returned to Earth for examination.

Installation of a docking target, a get-ahead task on this spacewalk, will be scheduled for the Tuesday spacewalk.

The cosmonauts returned to Pirs, entered the airlock and closed the hatch.

Flight Engineer Greg Chamitoff remained in the Soyuz during the spacewalk, part of the contingency plan for the unlikely event the Pirs airlock could not be repressurized. Otherwise he would not have had access to the station's lifeboat through a depressurized Pirs.

Volkov and Kononenko will conduct another spacewalk July 15 to outfit the Russian segment's exterior, install one scientific experiment and retrieve another.
› Back To Top