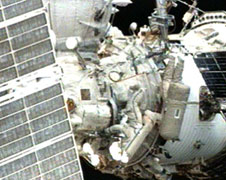 In this spacewalk, their second in less than a week, they also continued to outfit the station's exterior, including the installation of a docking target on the Zvezda service module. It will help with the docking of a Russian mini research module on the space-facing side of Zvezda. That module will be launched next year.

The spacewalk was in Russian Orlan suits from the Pirs docking compartment. Volkov, the lead spacewalker or EV1, wore the suit with red stripes. Kononenko, EV2, wore the blue-striped suit.

After leaving Pirs and setting up, the first task was the docking target. Kononenko used the boom of the Strela hand-powered crane, operated by Volkov, to move to the area at the front of Zvezda, the transfer compartment, to install the docking target.

Next they retracted Strela and used an installed spacewalkers' ladder to move to the small-diameter section of Zvezda. There they inspected bolt holes to be used to place an antenna adapter, part of the Kurs automated docking system. A Kurs antenna to be installed there later will be used for the first time next year.

After moving back to Strela, they moved a foot restraint from its boom to the exterior of Zvezda. They returned to Pirs, got an experiment called Vsplesk and moved with it to the large-diameter section of Zvezda. 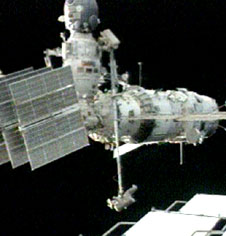 There they installed the experiment, which monitors seismic effects using high-energy particle streams in the near-Earth environment. Then they installed cabling.

In an unplanned task, Volkov straightened out a bent ham radio system antenna.

Finally, they moved to the Biorisk experiment, installed by Expedition 15 spacewalkers on Zvezda, and freed it from its mountings. The experiment studies the effects of the space environment on microorganisms.

With Biorisk and a tool carrier they moved down the spacewalkers' ladder and to Pirs. The closing of its hatch marked the official end of the spacewalk.

As he did last week, Flight Engineer Greg Chamitoff remained in the Soyuz during the spacewalk. That was part of contingency preparations for the unlikely event the Pirs airlock could not be repressurized.

The July 10 spacewalk by Volkov and Kononenko focused on inspection of their Soyuz TMA-12 spacecraft and retrieval of an explosive bolt, one of 10 that help separate the spacecraft's return module from its propulsion module. The bolt will be returned to Earth for examination.

Failure of those two modules to separate on time during re-entry on the most recent two Soyuz returns resulted in ballistic entries. Those steeper-than-normal entries, while safe, resulted in high-G rides for Soyuz occupants and landings several hundred miles short of the planned area.
› Back To Top