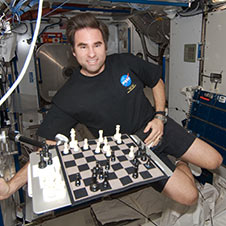 The first Earth vs. Space chess match, begun during astronaut Greg Chamitoff’s Expedition 17 stay aboard the International Space Station, is over – and the Earth won.

NASA and the U.S. Chess Federation (USCF) teamed up to host the match, which started in September 2008. Chamitoff conceded the match in a Dec. 16, 2009, letter to the third grade U.S. Chess Championship Team and its chess club teammates from Stevenson Elementary School in Bellevue, Wash. The USCF facilitated the match, coordinating worldwide voting on the Earth’s moves, which were proposed by the K-3 champions.

Chamitoff, who continued the match via e-mail after his 183-day space mission and return to Earth on Nov. 30, 2008, is scheduled to fly again on the upcoming STS-134 mission of Space Shuttle Endeavour. He sent the following letter to the students:

What a game! Huge congratulations on your victory! I'm truly proud of you, and inspired by your dedication, focus, brilliance, and patience too! Also, a huge congratulations to all of you who followed the game and participated as part of the “Earth Team,” by voting for the moves on-line.

This was a fantastic game with so many intricate twists and turns. When the time between moves is measured in days, it seems that the depth of analysis and strategy happens at a different level. This made for a very exciting game! This wasn't the longest game ever played, but for sure it set a record for long distance!

Greg Chamitoff looks for a new angle as he prepares for his next move. Photo Credit: NASA
› High-res Image

I wish we could have played the entire game between “Space” and “Earth” while I was still onboard the International Space Station, but perhaps there will be time for a complete “Earth vs Space” match one day, when some of you are living on the Moon or Mars. No doubt, that the game of chess will travel with us to the stars. But more importantly, it's terrific to see how the game of chess is inspiring so many young minds to think and work in ways that can prepare them for the roles they will play in building our future.

It's been a great honor for me to play a small part in that. Thanks to so many people from NASA, the U.S. Chess Federation, Stevenson Elementary, Bellevue College, the Seattle Museum of Flight, ChessMagnetSchool.com, and many others who made this game possible. May All Your Dreams Come True,