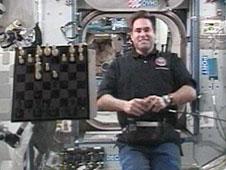 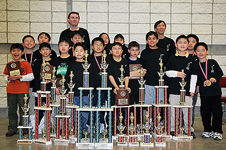 Students and coaches associated with the 2008 National Elementary School Chess Championship team from Stevenson Elementary School, Bellevue, Wash., pose with their trophies. The championships were played last May in Pittsburgh, Pa. The event had over 2,100 participants, organized into seven different groups - including four "Championship" groups (one each for 6th grade and under, 5th and under, 3rd and under, and K-1 - and three groups for players not deemed competitive with the participants in the four top sections). Only 11 of the pictured 16 players are participating in this event now, as five of them were 5th graders last spring, and have graduated to middle school.

NASA astronaut Greg Chamitoff met his opponents in the ongoing Earth vs. space chess match Thursday, Oct. 9. At 1:05 p.m. CDT, NASA Television broadcasted the live linkup with Chamitoff, who lives aboard the International Space Station, and his competitors from the Stevenson Elementary School in Bellevue, Wash.

The students are key players in the Earth vs. space match, proposing moves that are voted on by the public via the Internet. The match began Sept. 29.

The U.S. Chess Federation is facilitating the match on its Web site at:

Chamitoff, a space station flight engineer orbiting 210 miles above Earth at five miles a second, is a chess aficionado. He brought a chess set with him when he arrived at the complex last June. Chamitoff has added Velcro to the chess pieces to keep them from floating away in the weightlessness of space. He has been playing long-distance chess with station control centers around the world. So far, he is undefeated.

For more information about the U.S. Chess Federation, visit:

For more about Chamitoff and the space station, visit: