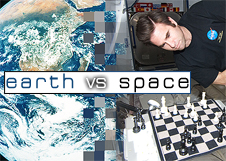 Astronaut Greg Chamitoff is getting his “Earth legs” back following a November return from the International Space Station, and that means he’s ready to resume the unique Earth vs. space chess match he started on orbit.

And you can still help Earth win, by casting your vote for the Earth’s move on the U.S. Chess Federation’s (USCF) web site.

NASA and the USCF teamed up to start the first trans-atmospheric public chess match in September while Chamitoff was a member of the Expedition 17 crew living on the space station.

Key players in the game are the kindergarten through third grade U.S. Chess Championship Team and its chess club teammates from Stevenson Elementary School in Bellevue, Wash. The K-3 champions will continue to select up to four possible moves each time it is Earth's turn, and then the public will vote on which move will be made. NASA will transmit the winning move to Chamitoff, who will respond from his home base in Houston, Texas. The USCF will facilitate the match on its web site at:

Chamitoff is a chess aficionado who brought a chess set with him when he arrived at the complex on the STS-124 space shuttle mission in June 2008, adding Velcro to the chess pieces to keep them from floating away in weightlessness. He returned home to Earth with the STS-126 crew of Endeavour on Nov. 30, 2008.

"For the past 10 years, the International Space Station has been an important platform to learn about living in space. We're excited to have the opportunity to engage not only young students, but the public at large in this unique chess match," said Heather Rarick, lead flight director for the current space station mission at NASA's Johnson Space Center in Houston.

Chamitoff also is set to complete several other matches he began with control centers at sites around the world -- in the United States, Moscow, Japan, Germany, France and Canada.

The game against the public moves at a pace of one move per day on weekdays only. Play may be slower, however, because Chamitoff only makes moves when his workload permits. Whenever Chamitoff responds, the Earth will respond after the public votes.