Greg Chamitoff looks for a new angle as he prepares for his next move against flight control teams. Photo Credit: NASA
› High-res Image

For more than a thousand years, the game of chess and its predecessors have been played on park tables, in homes, at schools and, in modern times, even on television and in arenas as a spectator sport.

But chess has now taken the next giant leap in a match that pits space against Earth.

NASA astronaut and chess aficionado Greg Chamitoff, speeding around the Earth at five miles a second aboard the International Space Station, is in the midst of a chess game with mission control centers.

Unfortunately for the ground, failure may be an option in this case: As the game enters its final stages, Chamitoff appears to be winning.

Chamitoff brought a chessboard with him to the orbital complex on the space shuttle in June. Aboard the station, he is supported by control centers at sites around the world -- including Houston, Moscow, Japan and Germany.

The centers take turns making moves against Chamitoff. Each center maintains a chess board showing the game's status. Chamitoff introduced the Earth vs. space chess match in a daily tag-up held with control centers to address questions regarding the day’s work. 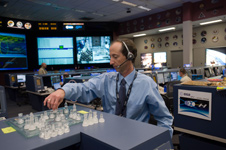 He learned chess from his father and played throughout most of his childhood. He said this “ultimate” chess match was a way to build camaraderie and team spirit with the flight control teams which support the station around the clock.

“Greg really has achieved his goal by getting us to realize that we can't beat him as a team unless we work together,” said Heather Rarick, the lead flight director for Expedition 17. “This competition with the crew has been well received.

"Part of it may be the competitive nature of our flight controllers -- who wouldn't want to beat an astronaut, someone with the right stuff," she said. "The competition is definitely good for the team since we work together using skills we otherwise wouldn't get to share, we learn more about each other as well as the crew.”

Chamitoff won the first game when Mission Control resigned, or conceded, on Aug. 13, 2008. This was the final state of the board at that time:

Read about the second game between Chamitoff and Mission Control and view the progress of the game: