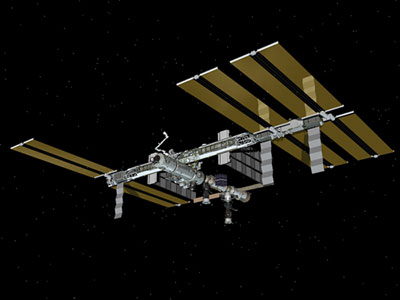 The station's 27th Progress unpiloted spacecraft brings to the orbiting laboratory more than 1,900 pounds of propellant, more than 100 pounds of oxygen and 2,921 pounds of dry cargo. Total cargo weight is 4,949 pounds.

P27 launched from the Baikonur Cosmodrome in Kazakhstan on Sunday, Dec. 23, at 2:12 a.m. EST. It replaces the trash-filled P26 which was undocked from Pirs Friday. P26 will be deorbited for destruction on re-entry in mid-January, after conducting Earth observation experiments.

The spacecraft used the automated Kurs system to dock to the station. Expedition 16 Flight Engineer Yuri Malenchenko was at the manual TORU docking system controls, should his intervention have become necessary.

Once Expedition 16 crew members, Malenchenko, Commander Peggy Whitson and Flight Engineer Dan Tani, have unloaded the cargo, P27 will be filled with trash and station discards. It will be undocked from the station and like its predecessor deorbited to burn in the Earth's atmosphere.