All three people aboard the Soyuz TMA-11 spacecraft were reported to be in good condition after their re-entry and landing. 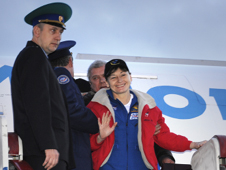 Expedition 16 Commander Peggy Whitson waves to a crowd of well wishers from the top of the airplane steps as she arrives at Chkalovsky airport, Star City along with Flight Engineer and Soyuz Commander Yuri Malenchenko and South Korean So-yeon Yi. Whitson, Malechenko and Yi landed their Soyuz TMA-11 spacecraft on April 19, 2008 in central Kazakhstan to complete 192 days in space for Whitson and Malenchenko and 11 days in orbit for Yi. Photo Credit: (NASA/Bill Ingalls)

The landing was approximately 295 miles from the expected landing site, delaying the recovery forces’ arrival to the spacecraft by approximately 45 minutes.

With Whitson and Malenchenko was spaceflight participant So-yeon Yi. She launched to the station April 8 with the Expedition 17 crew, Commander Sergei Volkov and Flight Engineer Oleg Kononenko, under contract with the Russian Federal Space Agency.

Expedition 16 crew members undocked their Soyuz spacecraft from the station at 1:06 a.m. Saturday. The deorbit burn to slow the Soyuz and begin its descent toward the Earth took place at 3:40 a.m.

When they landed, Whitson and Malenchenko had spent 192 days in space on their Expedition 16 flight, 190 of them on the station.

Whitson, 48, returned from her second mission to the station. She served as a flight engineer on the Expedition 5 crew, launching June 5, 2002, and returning to Earth Dec. 7 after almost 185 days in space.

She landed Saturday with a total of 377 days in space, more than any other U.S. spacefarer. On April 16 she broke the previous mark of 374 days set by Mike Foale on his six flights.

She holds a Ph.D. in biochemistry from Rice University in Houston. She began working for NASA as a research biochemist in 1989 and was selected as an astronaut in 1996.

Malenchenko, 46, a Russian Air Force colonel, is making his third long-duration spaceflight. He spent 126 days aboard the Russian space station Mir beginning July 1, 1994, and commanded Expedition 7, spending 185 days in space beginning April 26, 2006. He also was a member of the STS-106 crew of Atlantis on an almost-12-day mission to the station beginning Sept. 8, 2000.

He landed Saturday with a total of 515 days in space on his four flights. He has the ninth highest total of cumulative time in space of all humans.
› Back To Top