As landing day approaches a bit more quickly now, the list of last minute things I need to do before departure seems to expand inversely with the time remaining. People I wanted to thank from orbit, pictures I wanted to take, thoughts I wanted to capture in writing…it has always seemed that there would be plenty of time, until now.

Yuri pointed out last week, while catching a floating chunk of Japanese-provided rice with his chopsticks (a feat that I consider challenging when I have gravity-assist) that during our stay here this time, we have eaten food from the U.S. and Russia, of course, but also from Malaysia, France and Japan, and we are expecting Korean food with the arrival of the next Soyuz (and their Korean space flight participant).

Yuri’s insight with the food got me reflecting on what a truly international flavor (pun intended) this expedition has had. We have had the privilege to witness/participate in the addition of the Italian-built U.S. Harmony module, the European Columbus Laboratory module, the Kibo Japanese Logistics Module, and the Canadian-built robotic arm extension (Dextre). All of this has been added to my (well, ok, it’s not exactly just mine) Station in the last 6 months!

Each work day, we begin and end the day tagging up with the ground teams in the DPC (daily planning conference). During my first expedition here we would call Houston, Huntsville (in Alabama for payloads), and Moscow. During the course of this expedition, we have added calls to ground teams in Cologne, Germany, for the European Columbus module and Tsukuba, Japan, with the first installment of the 3-part Japanese Kibo laboratory. And most recently, we started working with Toulouse in France for the European Automated Transfer Vehicle (cargo re-supply ship) rendezvous to the Station. I have to admit, I (still) find it amazing/unbelievable/eye-watering that a farm girl (ok, it’s been a few years since I was a girl) has the opportunity to talk with people around the world from my orbiting home/lab on a daily basis. Even more than that, the around-the-world DPCs emphasize to me what an incredible partnership with the world we have established with our link, the International Space Station, up here in space. 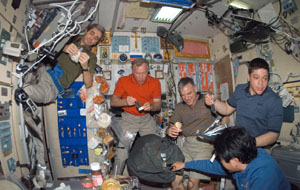