I remember my first flight in an airplane after returning to Earth after my last expedition. After the initial shock of realizing how close to the ground I was at 35,000 feet (yikes!) as compared to 200-ish miles that I had become accustomed to, my eyes were constantly drawn to the horizon, searching for the curve that I couldn’t quite see. 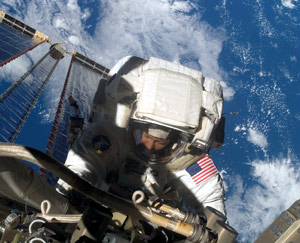 Although all the views of our planet are incredible and varied from our viewpoint up here on the Station, with the colors, textures, and lighting changing as we orbit…the most impressive view is the curve of the planet at the horizon. That curve is the special place where it is possible to see the layers of atmosphere extend beyond the surface to meet with the blackness of space beyond. Relative to the size of the Earth, it seems impossibly thin, less than a finger-width. The atmosphere carries all the shades of blue in that thin band, closest to the planet a glowing blue, like sunlit water over white sand, extending to the deepest blue-purple mixture that holds the blackness at bay.

As the night-side of the planet slips by beneath me, it carries on the fringes of darkness the colors of a sunset on the clouds below. The Station is still lit by the sun, despite the fact that we have already crossed the terminator between day and night below us. This is the timeframe when Station is most visible to folks on the ground, just before their dawn or after their dusk. A small bit of sunlight reflected off of our structure, illuminates us moving across their darkened sky. As the terminator approaches the horizon, the sun shows a blinding face that burns the atmosphere with molten reds and oranges before seemingly melting itself into the darkness, leaving a royal blue line that dissipates more slowly as the stars come out from hiding. Less than an hour passes before our path around the planet brings us back to the royal blue curve, signaling sunrise, as the process reverses itself. I am sure that after I return, I will again miss watching the curve of the Earth.
› Back To Top