I mentioned that returning to Station felt like “coming home.” On my first mission, the only even slightly negative thing that I experienced was the lack of variety and the boredom of food options (there really is only so much you can do with re-hydratable, canned or pre-packaged MRE-like food). For this expedition, we have a greater variety (16-day food cycle instead of 8-day food cycle like last time), but in spite of a few new options, I think I got bored with the food much sooner than I did during my first flight. Yuri has indicated the same boredom to me. Obviously, we have to stay healthy in order to accomplish our mission…so we eat anyway…something I refer to as “sport eating.” 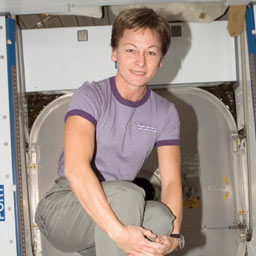 Our crew motto is, “It’s all about the sauce.” We have salsa, hot sauce, hot pepper sauce, sun-dried tomato paste, pesto paste, olive oil, catsup-like sauces, horseradish sauce, mayonnaise, BBQ sauce, mustards of various types… They come in plastic bottles and squeeze tubes. A common question at lunch/dinner is “What are you having with your sauce today?” Last night, I was giving Yuri a hard time. He was squeezing out the last few bits of a paste from one of the squeeze tubes directly into his mouth. I told him that was taking our motto, “It’s all about the sauce,” to the limit!

After our first 2 stage EVAs were over, we had a day and a half off. It was one of the first times in which we had some time off 2 days in a row during the mission…so we planned dinner and a movie night. Something I had created during Expedition 5 was space hamburgers. So I tried to reproduce that for Yuri and Dan. Our standard menu no longer has re-hydratable hamburger patties in it, so I had requested, in advance, to have patties and dinner rolls in my preference foods (a container selected by the individual crew member that can be used over the course of a month, as opposed to the menu foods that we all share). Space hamburgers went over pretty well, because they were different than the standard stuff, but there is some assembly required… using the sauce/sauces of choice to hold them together!
› Back To Top