On the Station, almost all of our windows face the Earth. During the first stage EVA, Yuri and I removed the thermal blanket that had been covering the small window (about 10 inch in diameter) on Harmony, which looked straight port. Although looking out the window below is always interesting, I think seeing the curve of the planet, and that thin band of atmosphere protecting it, is even more dramatic. On top of that, we had in the foreground 4 sets of brilliant orange solar arrays. I think I liked this vantage point because it really emphasized just where we are… We enjoyed it for about 3 days, before installing the centerline berthing camera to assist in the mating of the pressurized mating adapter (PMA—the Shuttle docking port), covering up our lateral view. However, an equivalent-sized window was opened up on the forward lab for a couple of days, with the removal of the PMA2 and before the berthing of the Harmony/PMA2 back into this position. We had spectacular views out the “windshield” of our vehicle. What a difference a window can make! 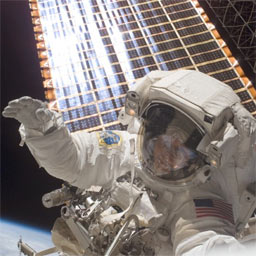 In order to move the Pressurized Mating Adapter 2 from the lab forward position to the Node 2/Harmony, and then two days later, move both the Node 2/PMA2 back to lab forward, the use of the robotic arm was required. Dan is our arm expert and was the lead for the PMA2/Node 2 moves while I took the lead on the common berthing mechanisms (the computer-driven bolting and unbolting of the modules). The second move, with the combination of both the PMA2/Node 2 stack, was the “heaviest” object ever moved by the Station robotic arm. Of course, in zero gravity it doesn’t really weigh anything, but mass does make a difference! Typically, our Station holds a specific attitude relative to the Earth and the velocity vector (the direction in which we are moving), using control moment gyros to hold/stabilize this position without the use of thrusters (it’s better not to burn fuel since that is a consumable that requires re-supply). Eventually, the stabilization requires more momentum than the CMGs can manage, and the gyros will “saturate.” Typically, if the gyros saturate, the control of Station is automatically handed over to the thrusters, but during bolting/unbolting and the robotics, we were not able to use thrusters. Thus, we anticipated that there was a “non-zero” chance that the Station would lose attitude control (LOAC, pronounced low-AK), moving such a massive object. Dan throughout training, and when he was moving the real thing, would start the joint maneuvers by counting down to the start, with “3-2-1-LOAC.” Humorous in training, but I still had the procedures for LOAC during these maneuvers handy.

During training we cover various malfunctions, including loss of camera views, loss of data or ability to command during bolting/unbolting. But on the “real” day, we saw none of this. The camera views were not only available, they were spectacular, with the curve of our Earth as a blue and white backdrop for the robotic moves. Magnificent! After finishing driving the 16 powered bolts into a stable enough position to allow the resumption of the attitude control, with Harmony berthed to its final resting place, I called Houston and said, “Have I mentioned lately how much I love nominal operations?” It was a flawless day that just got better.

We finished these operations a couple of hours early and moved onto vestibule outfitting. This outfitting is not difficult, but requires some choreography with the ground. We were cruising along with this, also ahead of schedule and the capcom, my friend Jim Kelly (Vegas), called up and asked if we wanted to continue and complete the ingress. Dan and I were so excited about the move and our progress with vestibule outfitting, we jumped at the opportunity and got the go to complete ingress (several days earlier than outlined in the plan). I could tell by Vegas’ voice, the ground folks were working a lot of steps as he constantly fed us updates and checked our status. Vegas gave me the go to open the hatch, but shortly after, we moved out of comm range with the ground. I opened the hatch and Yuri, Dan and I ingressed Harmony in its final position on the forward end of the lab. Without any fanfare, we floated, twirled and spun in our new room. Although, there wasn’t the equivalent of a “new car smell,” the lack of hardware on the rack fronts and the continuation of the straight length from Unity (Node 1) and Destiny (Lab) made the whole Station seem much larger than can be accounted for by the length of Harmony. A very nice addition to our house…
› Back To Top