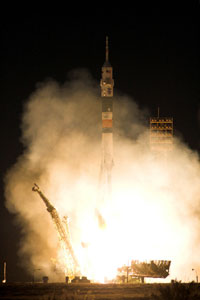 When does the mission become real? While training for a flight is a special time, it also builds in (after several years of training) the sensation that the actual spaceflight might not ever be real. My first flight, I didn’t truly believe I was going to have the opportunity to go into space until about L-6 seconds when the Shuttle engines roared to life below us. This time around, as Yuri, Sheikh and I walked to the Soyuz, hunched over a bit in our Sokol suits (they are made for sitting rolled up in a ball, not standing or walking), reality set in when the wind carried ice crystals of condensate off of the liquid fuel tank onto my face. I couldn’t stop grinning after that!

Image to right: The Soyuz TMA-11 spacecraft launches from the Baikonur Cosmodrome in Kazakhstan at sunset Oct. 10, 2007 carrying a new crew bound for a docking to the International Space Station on Oct. 12. Image credit: NASA

The launch on the Soyuz was a kinder, gentler launch than that of a Shuttle. Much less vibration and less g-force, with only the lurch forward and then back with the staging. When the nose fairing was pyrotechnically blown off (we were high enough that we didn’t need it for aerodynamics), our windows were no longer covered, and we saw the fire flies of sparks we left behind as we raced by. It was an early evening launch, but we were already in darkness as we headed north and east, and most importantly UP!

Upon reaching orbit, Yuri and I followed the procedures to test all the thrusters, extension/retraction of the docking probe (if it doesn’t work on the test, there is no reason to continue to the Station) and prepared for the 2 impulse burns to circularize our orbit. Most of the time, when we were not performing any maneuvers or the actual rendezvous with the Station, we were in “solar spin,” to stabilize our attitude, optimize the solar collection and heat rejection. Imagine being turned on a barbeque pit and watching the Earth slide by below and a few minutes later sliding back into the view from the opposite side of the window. I have to admit it was more disconcerting a view than I expected!

The majority of the time until docking, we slept, ate some cold rations, and waited…I have to admit, that the time between our maneuvers and rendezvous was a tad bit tedious. The descent module (triangular-shaped capsule) is about the size of the front seat of a sub-compact car…with 3 seats, life support and survival gear crammed in for us. The “living compartment” (trust me, this is a very generous translation), consists of the toilet, the water tank, the condensate collection and air cleaning systems, minimal stowage for food/hygiene items, and the majority of the “free” volume is filled with re-supply for the Station. In other words, the available volume, after stowage, is not that much different than the back seat of a sub-compact car. Yuri asked me after several hours (it seemed like days) if I thought we could go to Mars in a vehicle as small as the Soyuz. I told him I was pretty sure that I couldn’t, unless we come up with some kind of hibernation technique! 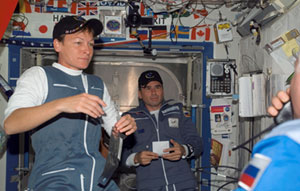 Arrival to Station…it felt even more like coming home than I expected it would. The inside doesn’t look all that different, but one look out one of the side windows (most of the windows look down at the Earth) was all it took to remind me how much the exterior of the Station has grown over the last year and a half. Two additional truss elements have been added to both the starboard and port sides. The orange solar array wings and the white radiators track the sun in two axes as we circle the Earth. It is truly amazing, technically…but even aesthetically. Viewing the truss and arrays with the curve of blue and white below us, our home looks like a gigantic sailing ship. It’s GREAT to be back!
› Back To Top