The preflight sequence this time around has been a bit different for me. On my last flight, our entire Expedition 5 crew launched and landed on the Shuttle at the Kennedy Space Center in Florida. This time around Yuri and I will launch on a Soyuz from the Baikonur Cosmodrome in Kazakhstan, and the third member of the long-duration Expedition 16 crew (Clay, Dan, Leo, Garrett) will rotate in/out on the visiting Shuttles.

It is my perception that Russian culture values its traditions more than we do in the U.S. For example, the sheer number of traditional events that are a part of the preflight process in Russia and Kazakhstan are huge by comparison to ours. The end of the training flow, with “final” exams and evaluations by a committee of engineering/design/instruction experts from Star City and Moscow, is a much more formalized process than we have in the U.S. While I was not worried about our skills or our ability to perform the tasks for the exams (or more importantly, in real life), the exams did serve to add some additional stress at the end of the training flow. I guess that I am a little more type-A than I like to admit, and don’t want to accept anything less than a perfect score! For each exam, the crew selected and signed the envelope with the “ticket” that determined our “fate” (which malfunctions we would receive) in the simulation, and our exam consists of the evaluation of how we responded/performed for these situations. 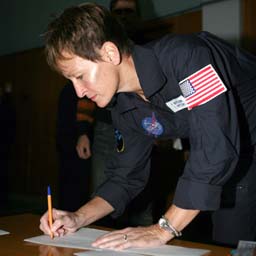 One of the more interesting of the exams was the manual entry. This is one of those really bad day scenarios where we assume that 2 levels of automatic systems have failed, and Yuri (Soyuz Commander) is incapacitated, such that I would have to perform the manual entry. It is much like a computer game, but has the additional challenge that you get to experience the g-profile that you input. The crew member reclines in a centrifuge chamber, with the Soyuz panel in front of them, and provides the manual inputs for control (although limited, the shape of the capsule provides a minimal capability of providing lift or faster descent). The crew member “flies” the re-entry, trying to match the profile that the computer would have done if it had not failed (such that the ground rescue crew will know approximately where to find us). There are nominally 2-g peaks during a descent, with g-forces up to 4.5. Different profiles differ in their “responsiveness,” which makes it more difficult to predict the reaction of a given input. Slight judgment/timing errors can offer the crew member the opportunity to “experience” their mistakes, since we feel the equivalently increased g-forces in the centrifuge. My personal experience suggests that this training is based on negative reinforcement!

Once the final exams were over, the prime and backup crews were “presented” to high level management from Gagarin Cosmonaut Training Center, Energia (contractor for Russian Space Agency) and the Russian Space Agency. A press conference followed. In response to the question about what was the hardest thing about the training program, I told them Russian language! Learning orbital mechanics and rendezvous wasn’t trivial, but by comparison, I would have to say that for me, Russian was/is still more of a challenge. Still in search of the language center that is supposed to be in my brain…

After the press conference, the crews (prime and backup) went to the small museum at Star City where there is a replica of Gagarin’s office. There the crews have traditionally written in a book while sitting at Gagarin’s desk/table. Yuri and I flipped through the book to find where we had each written in it before…Yuri said we needed to think up something different to say this time!

Next, a somewhat torturous 2.5 hour bus ride to the Red Square. I have been coming to Moscow since 1989. The single most obvious change that I have seen since that time is the HUGE number of cars in comparison to that first trip (when there were empty streets). I’m not sure of the accuracy, but I have heard numbers of more than a million people a day commute in/out of Moscow. My recent personal experience would suggest that there are not nearly enough roads for this number of commuters. A trip that in the early 1990s that would have taken 40-50 minutes, is now considered fast if accomplished in less than a couple of hours! I have to admit, however, St. Basil’s and the Kremlin Wall do make for a very dramatic backdrop in the crew photos that were taken there. We placed carnations on the markers in the Kremlin Wall for Gagarin (first person in space) and Korolev (Russian rocket designer, equivalent of our von Braun).

Once we arrived at the Baikonur Cosmodrome, which is in Kazakhstan, not Russia, we have been living at the Cosmonaut Hotel. We are in quarantine here (yes, it’s a bit like being in prison). This is very similar to the process at the Kennedy Space Center, where the contact with outside (non-medically screened) folks is minimized. We usually spend half-days studying flight data procedures and reviewing the timelines and activities that will be occurring on orbit.

The day after we arrived we performed the first of 2 “fit–checks.” Think of this as “checking out our ride.” We suited up in our very own suits and got into the vehicle to perform communication and fit-checks, and familiarize ourselves with some of the differences from the training simulators vs. the real thing. VERY COOL in any country to climb aboard a real rocket!

Most of the other days since then have had a recurring theme, much like “Groundhog Day.” Four or five hours of training, procedure reviews, timeline reviews…and “symbolic activities.” Symbolic activities consist of signing photos/mementos for the support personnel…my appreciation for the number of support personnel was personalized with writer’s cramp from signing hundreds of items! There was also a tree-planting ceremony on the Cosmonaut Hotel grounds. My little tree was planted less than 150 yards from Gagarin’s and Tereshkova’s (first female to fly in space) trees. It is difficult for me to feel that I could even come close to rating the honor of planting a tree in the same vicinity of the likes of Gagarin and Tereshkova! 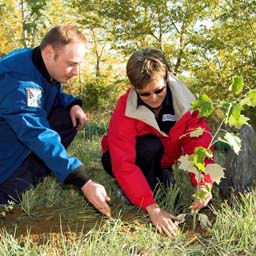