The spacewalkers looked for the cause of partial loss of electrical power to one of the station's two Beta Gimbal Assemblies (BGAs) for starboard solar wings. They also examined damage to the starboard Solar Alpha Rotary Joint (SARJ). 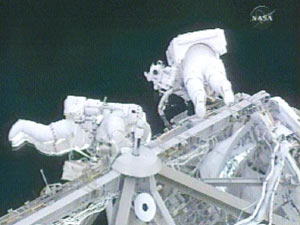 The SARJ enables the arrays to rotate in a paddlewheel-like fashion to follow the sun as the station orbits the Earth. The BGA lets the solar wings tilt along their long axis to point more directly to the sun.

After leaving the U.S. airlock Quest and setting up equipment, Tani, EV1 or lead spacewalker, and Whitson moved to the station's main truss and then out to near the end of its starboard side. There they inspected BGA 1A without seeing apparent damage. They disconnected two cables to facilitate ground tests.

On Dec. 8 the BGA's primary power was lost after three circuit breakers tripped. A backup power source still functions, but because of the loss of redundancy, the device was latched with the wing in a position suitable for docking of the shuttle Atlantis on STS-122.

With the cables disconnected the circuits remained closed, apparently clearing the cables as suspects. Whitson reconnected them late in the spacewalk.

For the BGA inspection, the spacewalkers entered the truss from opposite sides, but remained together to be able to warn one another of obstructions in that confined area. That inspection took about 45 minutes.

That SARJ was locked after vibrations were noted and increased power consumption was seen. Inspection findings Tuesday showed various degrees of contamination under the individual covers. Generally it was similar to what had been seen previously. 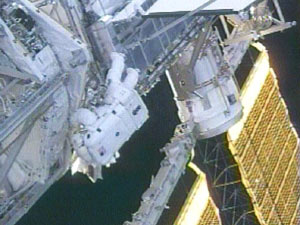 Tani and Whitson described what they saw, took photos and used tape and a scraper to collect samples of debris in the SARJ. That debris included metal shavings and "dusting" in the SARJ race ring.

Image at left: A spacewalker works on the starboard side of the International Space Station. Credit: NASA TV

After cleanup they entered the Quest airlock and closed its hatch. The beginning of repressurization marked the official end of the spacewalk.

The starboard array continues to produce some power, and no station operations have been affected. But managers want to resolve the SARJ and BGA problems before launch of the Japanese Kibo laboratory next year.

The spacewalk was the 100th for the construction and maintenance of the station. During the spacewalk, Whitson set a new record for cumulative spacewalk time by a woman.

About halfway through today's spacewalk she surpassed the mark set by Sunita Williams, a station crew member during Expeditions 14 and 15, who had a total of 29 hours and 17 minutes during four spacewalks. Whitson's new mark is 32 hours, 36 minutes in five spacewalks.
› Back To Top