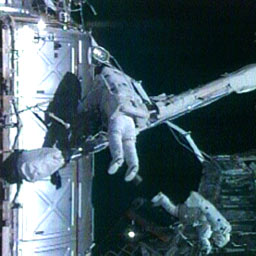 The spacewalkers completed all scheduled tasks, including another look at the starboard Solar Alpha Rotary Joint, and did some get-ahead work as well. The spacewalk otherwise was similar to the one on Nov. 20.

After leaving the airlock and setting up tools and equipment, Whitson removed, vented and stowed an ammonia jumper, part of a temporary cooling loop. Removing it allowed connection of the hookup of the permanent Loop B ammonia cooling loop on a second fluid tray on the station's exterior.

Tani meanwhile configured tools, then removed two fluid caps to prepare for connection of that permanent cooling Loop B. As in the Nov. 20 spacewalk, much of this outing was devoted to work with a fluid tray, this time Harmony's Loop B fluid tray. The 300-pound, 18.5-foot tray was moved from its temporary position on the S0 truss, at the center of the station's main truss, to Destiny, atop the port avionics tray.

As they did with the Loop A tray Nov. 20, they used a kind of relay technique, one moving ahead and attaching tethers to be ready to receive the tray, then the other moving farther forward to take the next handoff.

Once they reached the installation point they bolted down the tray, then hooked up its six fluid line connections. Cooling Loop B was successfully restarted later in the spacewalk. Whitson configured two Loop B heater cables. 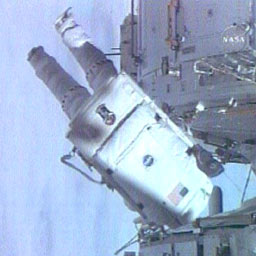 Whitson moved to the starboard side of Harmony. There she removed a thermal cover of a centerline berthing camera system and eight launch restraints from latch petals of a common berthing mechanism. The camera and petals will help dock and initially attach the European Space Agency laboratory Columbus, enabling bolts to be driven to secure it to its permanent station home during the STS-122 mission of Atlantis next month.

Image at left: Spacewalker Dan Tani works in between the Harmony Node 2 and the Destiny laboratory. Credit: NASA TV

Tani moved to the right side of the main truss and removed one of the 22 covers of the starboard Solar Alpha Rotary Joint (SARJ) and did an inspection similar to the one he did during his spacewalk during the STS-120 mission. He took digital pictures and samples of metallic shavings he found there. He described some surfaces as being abraded.

Whitson meanwhile installed the last remaining connection for the Station to Shuttle Power Transfer System. That get ahead task completed connections enabling shuttles Discovery and Endeavour to receive station power while docked at Pressurized Mating Adapter-2. She then joined Tani at the starboard SARJ, and offered more words on the SARJ, which had been showing vibration and increased power consumption.

Tani bagged and stowed the SARJ cover outside the airlock, leaving the joint available for a video survey by a camera on the station's robotic Canadarm2. That survey will be done after the STS-122 mission and will involve at least one full rotation of the suspect joint, which has experienced vibration and increased electrical current draw.

Tani relocated a tool bag and moved an articulated portable foot restraint to the forward end of Harmony as get-ahead tasks. As another Whitson reinstalled on Destiny a crew equipment translation aid light she had removed during a previous spacewalk to clear the way for other activities.

Whitson and Tani did the standard cleanup process and then entered the airlock. The beginning of its repressurization marked the official end of the spacewalk.
› Back To Top