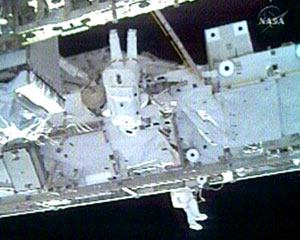 They completed scheduled tasks and did three get-ahead jobs in the spacewalk, which began about 50 minutes early.

After leaving the Quest airlock and setting up tools and equipment, Whitson removed, vented and stowed an ammonia jumper, part of a temporary cooling loop. Removing it allowed the hookup of the permanent ammonia cooling loop on a fluid tray on the station's exterior.

Tani meanwhile retrieved a bag of tools left outside on the station during the Nov. 9 spacewalk by Whitson and Flight Engineer Yuri Malenchenko. Then he removed two fluid caps to prepare for connection of that permanent cooling loop.

Next he moved on to reconfigure a circuit that was used for a Squib firing unit, a small pyrotechnical device that freed a radiator on the Port 1 truss for its deployment last Thursday.

Much of the spacewalk was devoted to work with the Loop A fluid tray. That 300-pound, 18.5-foot tray was moved from its temporary position on the S0 truss, at the center of the station's main truss, to the Destiny Lab, atop the starboard avionics tray. 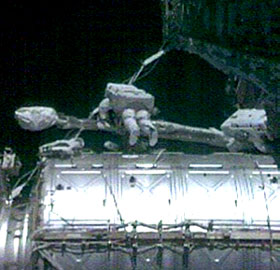 Tani joined Whitson at S0. They released the fluid tray and then moved it to Harmony. They used a kind of relay technique, one moving ahead and attaching tethers to be ready to receive the tray, then the other moving farther forward to take the next handoff.

Once they reached the installation point they bolted down the tray, then hooked up its six fluid line connections, two at S0, two at the tray and two in between.

Tani moved to his final task, on the port side of Harmony. There he mated 11 avionics lines. Whitson, meanwhile, configured heater cables, then mated electrical umbilicals by hooking up four electrical harnesses linking Pressurized Mating Adapter-2 at the outboard end of Harmony to station power.

The two spacewalkers did the standard cleanup process, then entered the airlock. The beginning of its repressurization marked the official end of the spacewalk. In the airlock, they did precautionary decontamination procedures after working around ammonia lines.

Another spacewalk by Whitson and Tani to complete the exterior hookup of Harmony is scheduled for Nov. 24.
› Back To Top