Whitson and Tani also inspected a joint that helps rotate the starboard solar arrays during the spacewalk, done from the station's Quest airlock in U.S. spacesuits. 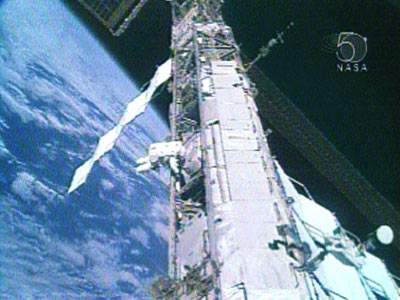 Image at right: An Expedition 16 spacewalker translates along the starboard side of the truss structure to begin SARJ inspections. Credit: NASA TV

Most of the spacewalk focused on replacement of the motor, the Bearing Motor Roll Ring Module (BMRRM). Called the 'broom," the motor drives the starboard solar wings as they tilt along their axis to follow the sun for optimal power generation as the station orbits the Earth.

Mission Control reported good electrical continuity to the new BMRRM. While spacewalkers were still outside, flight controllers completed a planned 3-degree rotation and then did a 360-degree rotation of those solar wings.

Major activities of the BMRRM replacement took place during the night part of the orbit, when less voltage is generated by the solar wings than when they are exposed to the sun. The replacement BMRRM was retrieved from its stowage place in Pressurized Mating Adapter-3 early this month in preparation for the spacewalk.

The motor is part of the Beta Gimbal Assembly, which experienced electrical failures Dec. 8. The removal and replacement of the BMRRM took about 3 hours, including pauses during the daylight part of the orbit.

The second major task of the spacewalk was inspection of the starboard Solar Alpha Rotary Joint (SARJ). That device causes the starboard solar wings to rotate in a paddlewheel-like motion to keep the arrays pointed toward the sun.

Station Flight Engineer Yuri Malenchenko helped the crew with suiting up and provided other support. Astronaut Tom Marshburn was the ground intravehicular officer. He was in the station flight control room in Houston's Mission Control Center, acting as spacewalk choreographer.

Once their tasks were completed and after cleanup the spacewalkers re-entered the Quest airlock and closed its hatch. The beginning of repressurization marked the official end of the spacewalk.
› Back To Top