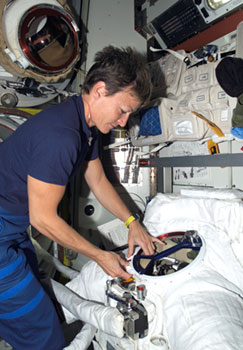 Their first task was to disconnect the Station to Shuttle Power Transfer System cables between the U.S. laboratory Destiny and PMA-2. Next they disconnected eight other cables between PMA-2 and the lab.

Whitson also removed a Crew Equipment Translation Aid light on the lab to make way for the trays. She took the light to the airlock. It will be reinstalled later.

Subsequently they demated connectors on rigid umbilicals on the side of the lab, temporarily stowing them on the lab and elsewhere. That was done to make them accessible once fluid umbilical trays are installed there after the Harmony move. Malenchenko installed caps on receptacles left open by the PMA cable demates.

While Whitson completed connections for a power and data grapple fixture on the bottom of Harmony that will provide a base for the station's robotic arm, Malenchenko removed and replaced a failed electrical circuit box called a remote power controller module.

The next task took them to the outboard end of the Harmony node, where PMA-2 will be installed. There they removed the active Common Berthing Mechanism cover. The cover was held on by a strap around the circumference. They bundled the cover and secured it with wire ties. It will be put in a Progress cargo carrier for disposal.

Malenchenko moved back behind the Z-1 truss to reconfigure a power system, removing an electrical jumper. Whitson worked at the right side of the "rats' nest," at the base of Z-1 on another reconfiguration.

Then she retrieved a box called the base-band signal processor and returned it to the airlock. It will be returned to Earth for refurbishment. Malenchenko transferred tools between two bags and moved a bag to the S0 truss for later spacewalks.

PMA-2 is scheduled to be removed from Destiny and placed on Harmony, using the station's robotic arm, on Monday, Nov. 12. Harmony, brought to the station by Discovery, is to be moved from its temporary position on the left side of the Unity node to the front of Destiny, again using Canadarm2, on Wednesday, Nov. 14.
› Back To Top