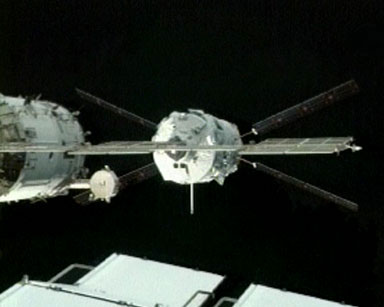 The unpiloted cargo spacecraft carries more than 7,500 pounds of equipment, supplies, water, fuel and gases for the station.

It also carries hopes and aspirations of the European Space Agency. The ATV and its advanced rendezvous system could play an important role in future space exploration.

The Jules Verne docked smoothly using its automated, laser guided rendezvous system. It was in many respects a repeat of the dry run on Monday. That practice approach brought the ATV to within 36 feet of the docking port.

The Jules Verne launched from Kourou, French Guiana, on an Ariane 5 rocket on March 9.

Solar arrays deployed as planned after two engine firings more than an hour and a half after launch. That placed the ATV in a parking orbit about 1,200 miles from the station. 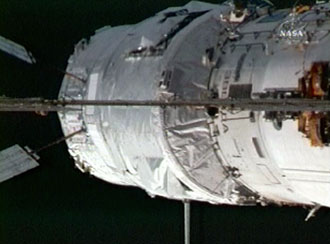 It was, at almost 22 tons, the largest payload ever launched by the Ariane 5.

The Jules Verne is named after the acclaimed French science-fiction author. It is the first of perhaps seven such spacecraft to be built.

The ATV can carry about three times the cargo weight carried by the Progress, the reliable Russian unpiloted cargo carrier.

The Jules Verne initially was placed in an orbit a safe distance from the station, where a series of tests were performed. Among the last of the tests were two approaches to the station.

Those approaches ended in "escape" maneuvers, to verify a collision avoidance system. It would be used if the ATV automated docking system should fail.

The spacecraft is scheduled to remain at the station until August, for unloading and to reboost the orbiting laboratory. Subsequently it will be filled with station garbage and discards. Then it will be deorbited for destruction on re-entry over the Pacific.
› Back To Top