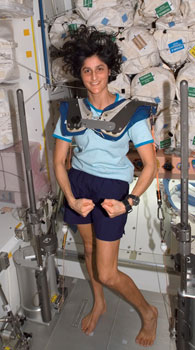 Call it a great leap forward for women in space.

After six years of people, three of whom have been women, living in space aboard the International Space Station, the female time-in-space endurance record set 11 years ago has been broken.

And it was broken in a single flight.

NASA Astronaut Sunita Williams set a new record this morning at 12:47 CDT for the longest duration spaceflight by a woman. At that time, Williams surpassed Shannon Lucid’s mark of 188 days, 4 hours set in 1996.

Williams began her record-setting flight when she launched with the crew of STS-116 in December 2006. The Massachusetts native remained onboard the station as a member of the Expedition 14 crew and then joined the Expedition 15 crew in April. Her spaceflight will come to a close when she returns to Earth aboard Space Shuttle Atlantis with the STS-117 crew.

Although this is only her first spaceflight, Williams also became the record-holder for most hours outside a spacecraft by a female by completing four spacewalks during Expedition 14 with a total time of 29 hours, 17 minutes. 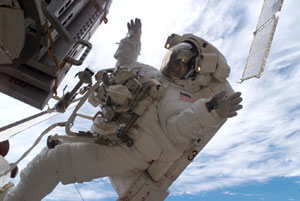 “It was very exciting to watch her spacewalks and to watch her accumulate more spacewalk time than any other female in the universe,” said Lucid, who set the previous female space duration record while flying aboard the Russian Mir Space Station. “These [long-term] flights are providing the needed confidence so that some day in the near future we can depart low-Earth orbit and head on out to Mars.”

During her stay on orbit, Williams has worked with experiments across a wide variety of fields, including human life sciences, physical sciences and Earth observation as well as education and technology demonstrations.

Some of these experiments give scientists critical insight into the effects of weightlessness on our bodies while others show ways to prevent effects we already know about like muscle and bone loss.

In addition to rigorous exercise, Williams also collected and stored her blood while in space to add to an ongoing study on nutrition, another key element of living in space for long stretches of time.

The results of this study may impact nutritional requirements and food systems developed for future ventures in space. “Her mission has been critically important to our overall space program,” said NASA Astronaut Eileen Collins, another female pioneer in spaceflight. Collins became the first woman to command a spaceflight mission during the STS-93 mission on Space Shuttle Columbia.

“She truly is a space marathoner who shows young women everywhere that there's a place in the space program for them.” If her stay in space concludes as scheduled, with her return on Atlantis on June 21, Williams will have flown a total of 194 days in space.
Debbie Sharp
NASA's Johnson Space Center
› Back To Top