Taking Out the Trash

Life on the ISS:
What a game!!! How about those Patriots! Unbelievable. We were able to watch about 60% of the game up here thanks to some dedicated folks in Houston who hooked us up. Even NASA has the technology to ship a football game to space! Amazing, except for the last 15 seconds or so when San Diego was going for the kick, we lost video and audio and were dying up here wondering what happened. Next we heard someone was hugging someone and we couldn’t tell who was being happily or unhappily hugged. Finally the video came back after the game had been over a good minute and we saw the score. Talk about being on the edge of your seat. Imagine the 20-minute delay if you were on Mars and wanted to know if the Patriots had won!!!

So the sounds on the Station are not quite as loud as the roars coming from the bars in New England last weekend, but there was a significant thundering noise in the aft end of the Station as we again changed attitude for the Progress undocking. Our attitude (meaning pitch, roll, and yaw of the ISS) was belly-first into the "wind" in order to push the Progress away and out in front of us. Misha worked like crazy to get all the last minute trash in the vehicle. In fact, he almost couldn’t get out as he was shoving the last bits of dirty laundry behind the hatch. But he managed to squeeze out and we closed and locked the hatch for the undocking Monday evening. 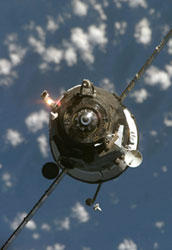 Undocking evening we were all in the Service Module looking out the windows to watch the Progress undock. It was a little eerie to go next to the hatch and hear the mechanisms unlatching. We watched as the pyros fired the Progress pushing it away from us. Amazing how fast the separation was. Makes one think about keeping tethered when doing spacewalks; one little push and you are gone!

Image to right: A view from the windows in the Russian Segment, Service Module. Image credit: NASA

So, with an empty docking port we have been anxiously awaiting the arrival of the next Progress, and early Saturday morning we got sight of her. She is Progress number 24, so we call her 24P. We have a Russian name for her too. We spotted her about 45 kilometers (how many miles is that???) and it was so cool. She was a bright star “below” us! What was really weird was for the first time since launch we all had the feeling of the tremendous speed we are going. Maybe it is just because we are in this spacecraft and we are calmly flying over the Earth that seems so serene. But when you see another vehicle moving approximately the same speed with the Earth in its background, one understands how much ground we are covering. Our speed is about 17,500 mph to keep us up in that orbit - can you calculate how many miles that is per second? It is impressive! 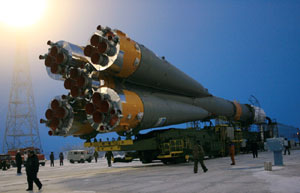 Image to left: Roll-out of the Progress 24 vehicle at the Baikonur Cosmodrome, Kazakhstan. Image credit: NASA

The Progress is launched from Baikonur in Kazakhstan, just like the Soyuz. It almost looks the same as the Soyuz, but unmanned, so essentially filled up with supplies for us - anything from food, science experiments, repair parts, etc., can go in it. It is flown automatically from the Russian Mission Control outside of Moscow in a town named Korolev. Here is a bonus question - Who was Korolev? In case there were any problems with the docking, Misha was ready to take control and “fly” it into the docking cone here on the ISS. Spacecraft are cool!

Not only did we see our Progress this week, we also have been seeing the McNaught Comet and it is bright! We, by chance, saw it one evening when we were checking out windows for the Progress undock/dock. LA and I were squished in the Soyuz, hanging upside down when there it was on the horizon. It was going away from us so it initially looked like an airplane light, but it was way too bright and way too high in the atmosphere. It also had contrails with it, like you see from the back of an airplane - in a swirled pattern. It was absolutely beautiful and hung in the dusk sky for quite some time! Hope you get out to see it sometime this month!

Cool places we have flown over this week - “hints”
• The rain forest in South America, Bolivia, Brazil, and Paraguay - they are so dark, it is almost deceiving when you look down and see clouds over it, and it looks like the forest is the ocean. Then we see the rivers. The rivers are absolutely obvious because they are large, curvy and muddy coming from the mountains on the west side!
• Straits of Magellan - when we were talking to Don Pettit in Antarctica…amazing to see and wonder how they were able to navigate through those fjords without prior knowledge and get through from the Atlantic to the Pacific. Those were real brave explorers.
• I can’t help taking pictures of New England.
• Usually over Canada. The snow is there - good conditions for skiing.
• St. Lawrence Seaway

Space Food:
• The usual - canned fish, soup - borscht, canned beef, lamb, pork with vegetables.
• Opened a new beverage container so I am enjoying Kona coffee from Hawaii with cream and sugar. Hmmm.
• Mike’s [husband] birthday celebration dinner!!! Yummy! Smoked turkey, candied yams, cornbread stuffing, and dried cranberries. For dessert, chocolate pudding cake - warm and topped off with a piece of chocolate/espresso candy and tea.
• In contrast to Mike’s birthday dinner, Thursday night I had “my ideal” dinner - baked tofu, teriyaki vegetable, apple-cranberry cobbler. Yummy!!! And to top it all off, then I had a popcorn ball while we watched another great Russian movie called “Barber of Siberia” - sort of like Barber of Seville. If you can find a version with English subtitles, it is must see!

Exercise:
• Running is getting better and better!
• RED squats, squats, and more squats…starting to ramp up the upper body training as well to get ready for EVA at the end of the month. First one should be on the 31st of January.
• Bike 3X for 35-40 minutes of interval training to get the heart rate up, and then walk/run for 15 to 20 minutes each time after the bike.
• Run 3X - 4.9 miles, 3.6 miles, made it to 5.0 miles!!!!

Things we did this week:
They’re blinding me with science!!!
• GRAVI experiment - Growing soybeans under varying gravitational loads in a centrifuge. I have my mom’s green thumb up here!
• TRAC reaction control test - Second test to see what is happening with our reaction times.
• Nutrition experiment - Took blood and urine samples and put them in our freezer, called MELFI (Minus-Eighty Lab Freezer ISS).
• Progress Undock
• Sleep-shift to accommodate rendezvous of next Progress (about 15 hours one way and then back)
• Progress Dock
• Crew discretionary event with Don Pettit (Expedition 6 to ISS) in Antarctica. He is there looking for meteorites! We talked about International Polar Year which is coming up in March.
• Public affairs event. We talked about our upcoming spacewalks and life on ISS.