It's All About Food

Life on the ISS:
• Well it has been quite a week. There were a couple days in there that I sort of don't remember. We went to sleep early to wake up really early for the Progress docking. Then we stayed up a normal day and the end of that day was a blur…

• But the arrival of a fat little Progress named "Gorby" was well worth it. I think I told you we name these vehicles. Vova was the first, bad one. Violet is one we have now that is for trash - she was always good to us. And now we have Gorby - overflowing with goodies for us. As soon as Fyodor cracked open the hatch the smell of apples and oranges filled up the place! It was awesome!

This is the mechanism that is on the front of the Progress that makes the initial contact and connection. After the main hooks are attached and we equalize the pressure, we open the hatch, remove the mechanism to be able to get inside the vehicle.

• We have had wonderful meals all week! Besides being able to chomp on an apple, we've had grapefruits for breakfast, oranges for snacks and tomatoes with every meal! We are living like kings! 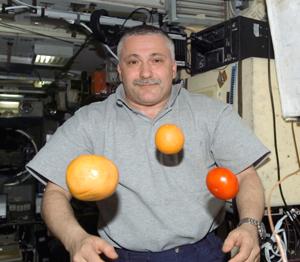 Image to right: Cosmonaut Fyodor N. Yurchikhin, Expedition 15 commander representing Russia's Federal Space Agency, is pictured near "fresh" fruit floating freely in the Zvezda Service Module of the International Space Station. The fruit was part of a recent delivery of food and supplies sent up via a Progress resupply craft. Image credit: NASA

• Not only did we get food, and of course CANDY (lots of it), we also got some cards and gifts from folks back home. It was great, sort of like a little Christmas. Everyone took a little time to themselves to sit back, read and enjoy the news (though old) from home. I even got some launch letters and notes, particularly sparkly notes (thanks, Twinkle) from the prelaunch party!

Cool Places we've flown over:
• U.S., only some though. Our orbit is starting to take us west. Bummer.
• Western Africa
• Middle East
• India

Good Food:
Some of the goodies we ate up in the first day included gourmet chocolate covered Bing cherries and cashews in honey and sesame seeds. Okay, so we indulged! No reason to suffer up here! One other astronaut who had flown on Mir in the 90s told me to eat the best thing I saw each day - because tomorrow there will be a new best thing!

• I only suffered through one can of meat this week, so I think the stink is going away!!!
• I have been eating a bunch of tuna instead. First of all, we got new U.S. main course food containers. There I found Tuna Noodle Casserole. Sort of like Tuna helper. It was really good with some Sriracha Vietnamese hot sauce on it. Not bad for Annette Funicello food …. (Mike, my husband can explain). I was on a tuna kick since we also got a bunch of those tuna packets. I decided to try to make my own tuna casserole so I heated up the tuna packet, rehydrated some macaroni and cheese and mixed it together with green beans on the side. Not too bad. Too bad we don't have french fried onion rings to sprinkle (term used very loosely up here) on top! Needed some Sriracha sauce too.
• Oh, one of the best things we got in the Gorby Progress was real Russian garlic paste and horseradish paste! Wow, that makes any meal taste good! For a couple nights in a row we had dessert of tomatoes and cheese. Fyodor showed us how to put the garlic paste right on the tomato with the cheese. Then we did the same thing with the horseradish. It was great!
• It feels really good to eat fresh food. I automatically feel healthier.

Things we did:
Progress Docking!!!

Science stuff
• EMCH (Elastic Memory Composite Hinge). Composite material hinge.
• LOCAD (Lab on a Chip). Norm’s horseshoe crab blood experiment - This was my last time to do this test. Sort of sad, but a great feeling to know we contributed to the advancement of this technique. Have to say thanks to all those blood donors! As Norm pointed out, it is astonishing to think of us bringing part of a species millions of years old to space for future technical advancement.
• CFE (Capillary Flow Experiment). This is the lava lamp experiment I have done before, usually on the weekend in our spare time.
• Oleg and Fyodor did medical test to get ready for their EVAs. They do a cycle ergometer test for their arms and upper body. It is a good workout where they are required to go at a high load for 3 minutes. The ground through telemetry watches their heart rate to see how hard they are working.

Maintenance Stuff
• Computer reload. This was a very scary event for me. We took down all the support computers we have up here and reloaded them. Then started the file server and all the support computers back up again. Computers are not my forte so I was more than anxious about doing this. However, all seemed to work flawlessly with the expert help from our ground team led by Lisa Harris! We finished Saturday afternoon, so that is why this note is a little late coming to you.
• Installed a panel for the new computer system that Clay will finish installing. The panel is ready for multiple computers to plug into. Just like you probably have at work. This will be a big change for us as we have an integrated LAN rather than a serial LAN. Should make the computers a little faster I think!
• WATER, Water!!! We also got water from Gorby. This is Oleg working with a typical water container. Moved water from Progress to tanks in the ISS. 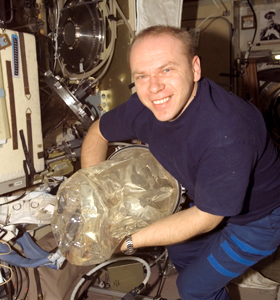 Public Relations Stuff
• PAO events with C-SPAN. This was pretty cool because it was a live event where folks got to call in to ask questions. We got questions from all over the country, kids and adults. Pretty cool idea, and I am glad we were able to do it even though one of the questions was a little too embarrassing for most up here - if you must know, look it up.
• PAO event with WHDH-TV and WBZ-TV in Boston. I was decked out in my new Big Pappi Red Sox shirt for the Boston event. The reporters were asking me about keeping up with the Red Sox - I haven't been doing that as well as I would have liked, but I know that they are beating the Yankees bad and whipped Baltimore on Mother's Day. How nice is that!
• Talked to the International Space School in Scotland! Gosh, those kids are so polite. Their questions were great and I got invited to come visit them next summer! I can't wait.
• HAM radio pass with Barrhaven Pulic School, Ottawa, Ontario, Canada. Got to talk to the niece of one of my colleagues here at NASA. That was pretty neat!
• HAM radio pass with Carberry Intermediate School, Emmett, Idaho - tough questions!
• NEEMO netmeeting contact! Talked with habitat underwater off of Key Largo. They were on a 10-day mission underwater!
› Back To Top