Life on the ISS:
Pre-breathe and getting ready to go outside...it is a long process. We are up around 08:30 and get outside around noon. We work outside for 6-7 hours and then go through an hour process to get out of the suit. Misha was instrumental in getting us all suited up. He was working away for all three EVAs to get us ready. Here are a couple pictures of the preparations: 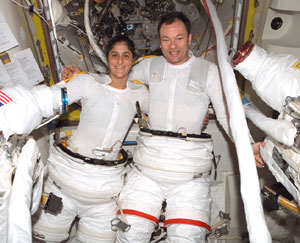 Getting in our suits...We are in our long underwear which have tubes of cooling water through it for our heat regulation. 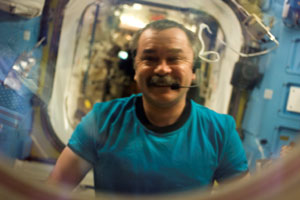 Saying goodbye to Misha through the hatch window...Just a cool picture!

Image to right: Cosmonaut Mikhail Tyurin, Expedition 14 flight engineer, peers out through a hatch window at astronaut Sunita L. Williams (out of frame) as the newest member of the crew begins her spacewalk to work on the International Space Station. Today's EVA is the Expedition 14 crew's third in nine days. Image credit: NASA

The smell of space…We had a long discussion about this over the dinner table at the end of our EVA on Thursday. Why does the space suit, tools and airlock, for that matter, all smell like something metallic when we come in from an EVA? We finally agreed that it is probably a result of the ionization of aluminum of the Space Station. The Space Station is primarily made of aluminum. The smell is really weird and sort of like burning metal. It is absolutely distinct and totally repeatable. The first time I smelled it was after Beamer’s and Christer’s first EVA on STS-116. It was overwhelming when we opened that hatch and the smell migrated into the Station. You can still smell that burning metal smell in the space suit a couple of days after. It lingers in the fabric when you take a whiff. So we also decided that there is really no smell to space - it only smells because we are operating in close proximity to something that is ionizing.

The feel of space…Some folks have asked what it is like to work out in space. Yes, you can work upside down, right side up, sideways - anyway you want to, to make it convenient. We train in a very large pool, called the Neutral Buoyancy Laboratory, for these spacewalks because floating in the water column helps us simulate the weightlessness of space. With the help of the divers we can float at a certain depth in the water and practice our tasks. However, gravity is still there so we still have a sense of up and down. Plus the pool walls give you the sense of right, left, forward and aft in your periphery vision. Out in space there is no gravity to speak of, and there are no walls - so we really don’t have the feeling of up or down, forward and aft, left and right at all. This is good and bad. Good because it allows you to maneuver yourself with your arms and hands in any direction to put your worksite right in front of you. Bad, because if you change your orientation from what you practiced and are familiar with, potentially at night when it is really dark out there, your sense of direction may need some help. Really knowing the layout of the outside of Station and using visual landmarks such as antennas and cameras, etc., are essential for orientation. Space is absolutely a 3-D world in comparison to our 2-D world on Earth.

The sound of space…I thought I would talk about this one a little, reflecting on my experience from my EVA on STS-116. What is true and what most folks think is that there is no sound in space. From almost all recollections I would agree. However, during the solar array retract attempt during the Shuttle mission, I “heard” something. If you remember, Beamer and I were up on the mast canister of the solar array we were trying to retract. The folks inside and on the ground were sending commands to the motor in the canister to retract the array. My hand was holding onto a handrail on the canister. As soon as that motor started turning, I “heard” it. Actually, I heard it through my arm, connected to my hand, connected to the structure of the canister, connected to the motor assembly. It was so natural for me to think I heard it - I forgot I was in space and there is no sound in space. In fact it was the vibration - which sound is - that generated the “sound” I heard, which so closely resembled the motor. Acoustics - so cool!

Thought I would share a couple of worksites with you! 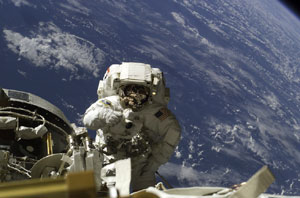 This is a picture of Mike LA on the front of the ISS...

Image to left: Astronaut Michael A. Lopez-Alegria, Expedition 14 commander and NASA ISS science officer, pauses near the front of the International Space Station during one of several Expedition 14 spacewalks--the third in nine days--to work on the orbital outpost. Image credit: NASA 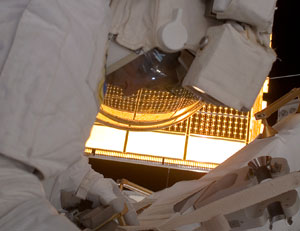 Suni and the solar array...recognize the Indian nose (and the little bite marks on it)???? 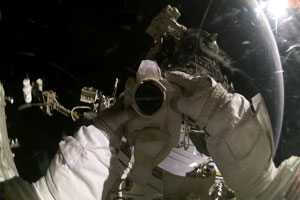 My artistic shot of myself and LA in my visor...That is a reflection of my hands taking the picture and LA farther out in front of me working.

Image to left: Astronaut Sunita L. Williams, flight engineer, waxed artistic when she shot this digital still photo of herself and astronaut Michael A. Lopez-Alegria (top center), Expedition 14 commander and NASA ISS science officer, visible in her helmet visor. That is a reflection of her hands taking the picture during one of several recent spacewalks the crew has taken to work on the International Space Station. Image credit: NASA

Cool places we have flown over this week:
• Patagonia! We saw this view from outside - incredible!
• The outback of Australia - it is wild country. Almost seems like another planet from up here. If I didn't know it, I wouldn't have thought we were flying over Earth.

Space food:
• The usual…canned fish or meat with cabbage, potatoes, rice or white sauce. White sauce is sort of like mushy dumplings surrounding the meat - in the cracks and crevices to take up the shape of the can. At first, it did not look appetizing to me thinking it was pure fat, but after tasting it, it is a flour substance. Not bad actually!
• Peanut butter and marshmallow cream sandwich on a tortilla! Twice! One per EVA. Yummy. My ultimate is a thin spreading of peanut butter, then about ½ inch of marshmallow cream…Heaven.

I carbo loaded with ravioli with meat sauce the night before the EVA. It is okay actually. We have tubes of garlic paste and pesto paste that are really nice to add to these meals. All the main dishes are a little bland to accommodate all kinds of taste buds. So, our family and friends have supplied us with tubes or jars of sauces to spice things up. Other types of sauces which have come in handy are wasabi, horseradish, Korean hot sauce (that red stuff in the squeeze bottle). That way each of us can make the food as spicy as we want.

As a celebration for finishing the 3 EVAs we had a little feast. We had herring in burgundy sauce (tomato sauce really), rye bread, pickles, borscht and mashed potatoes with mushrooms and onions. Misha and I split a “fresh” garlic clove and followed it up with some hot tea. A little odd all these tastes, but it was fun just hanging around the table chatting about the view from outside and what we had experienced. Dinner went late, but we had ½ day on Friday, so we slept in!

Exercise:
• EVA Sunday and Thursday. I think my upper body has gotten a workout!
• 3 x 35 minutes of interval training on the bike, then 1.5 miles jog/run.
• Ran 2 x 3.5miles. Tried to get on TVIS each day, except EVA days for just a couple miles. I don’t want to decrease my progress. It is amazing how microgravity creeps in. There really are no rest days up here because the lack of gravity is always there, eating away at your fitness level, bone mass and muscle mass. I think consistency is the key to success. We will see in July!

Things we did this week: Groundhog Day, again and again…
• EMU (extravehicular mobility unit - space suit) battery charge
• EMU helmet light battery charge
• Pistol grip tool (EVA power tool) battery charge
• Fluid quick disconnect training (we will be working with ammonia lines outside and this type of fitting is specially made for these lines)
• Ammonia contamination review (we could have a leak manipulating these lines)
• EVA procedures review