I have now been back on terra firma, our home planet Earth, for about 3 months. In NASA terms we would call that “return plus 3 months” or “R + 90 days.” I have been pronounced by my flight surgeon as “back to normal” physically by virtue of the fact that I successfully completed my physical rehabilitation in the 6th week. Mentally, well that’s another story! 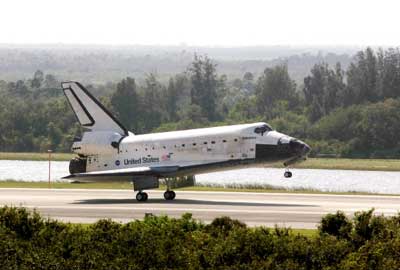 The time after landing is just as busy, maybe more so, than the time I was in space. I have attended numerous debriefing sessions with management, operators, flight directors, engineers, payload designers, educators…just about everybody you can think of. In these sessions we discussed what went right on the mission, what went wrong and how we might all improve for the future, including more Space Station increments and the efforts to take humans back to the moon and on to Mars. In addition, I have continued to exercise faithfully for about 2.5 hours every day even though the official time period of rehabilitation has expired. I have reunited with my family and many of our friends, and yes, I have had that medium rare, T-bone steak (corn fed Nebraska beef!) and baked potato…a couple of times over!

I even had the opportunity to travel with my wife and family. First, we all attended the Fiesta Bowl festivities in Phoenix, Arizona, including a ride in the parade with the crew of STS-118 and then, my wife and I enjoyed an international event with the crew of STS-120 as we jetted to Italy for a whirlwind twelve-day trip. Italy was highlighted by visits to the Italian Space Agency and the Ferrari factory, an appearance on an Italian variety TV show, a trip to the top of the Leaning Tower of Pisa, a stroll through the ruins of the Roman Forum and Coliseum and a meeting with the Italian President and an opportunity to shake hands with the Pope! It was fast and furious, but an awesome adventure nonetheless!

I believe that one of the most important aspects of the post flight period is that I have the opportunity to travel and share my stories and experiences with as many people as possible. This will begin in earnest at the end of February and will continue through most of May. I am especially excited about returning back to Nebraska and the Midwest to convey my excitement over the wonders of space travel to those folks who helped shape my life. I look forward to seeing more of my family members and friends and enlightening them on such topics as “going to the bathroom in space” and “launching candy toward video camera lenses!”
› Back To Top