On November 7, 2007, the Space Shuttle Discovery glided to a picture perfect landing at the Kennedy Space Center (KSC) near Cape Canaveral, Florida. I was strapped in to the center seat on the Space Shuttle’s middeck, resting comfortably on my back as she had executed her first role reversal, an energy reducing maneuver, directly over the state of Nebraska on her way to Florida. My 152-day journey in space that began with a thunderous launch onboard the Space Shuttle Atlantis on what would have been my father’s 77th birthday, had come to an end as we gently touched down on Runway 15 and rolled to a stop directly on the runway centerline. That monumental day marked not only the completion of 151 days, 18 hours, 23 minutes and 14 seconds for me in space, but the 15th wedding anniversary for Susan and me. 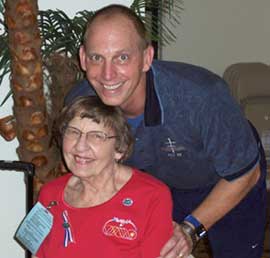 Image to right: Astronaut Clay Anderson, Expedition 15 flight engineer, visits with his mother as the day nears for his launch aboard the Space Shuttle Atlantis with the STS-117 crew. Photo credit: NASA/Lorie Hartzell

Just a mere 12 hours later, I was gingerly navigating the confined space of my private room in the astronaut crew quarters (ACQ) facility at KSC to enjoy my first hot shower in over five months! After spending 45 minutes with the warm water pelting my head, shoulders and arms, I slowly dressed myself in my NASA astronaut flight suit feeling like I weighed every single bit of my 195 pounds fully realizing I was back in the gripping confines of the Earth’s gravity! Having grunted and groaned, stretched and tugged to get my flight boots on and properly tied, I carefully rose from my chair and eventually emerged from my room to begin a slow, methodical and “wall-aided” walk down the hallway. 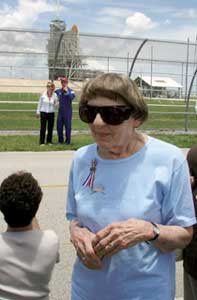 Moving with a determination bolstered by 5 months in outer space and keeping my head steady so as to not start the world spinning again and send me headfirst into a face plant with the carpeted (but concrete) floor, I closed the distance between me and one of the main ACQ lounge areas prepared to fulfill one of the greatest days of my lifetime. As I entered the room I was reunited with my wonderful family. Not just my beautiful wife Susan and our children Cole and Sutton mind you, but my brother Kirby, my sister Lorie and their families, Susan’s mother and father and my uncle. And there in the back, sitting quietly in a chair, her face and eyes covered with those huge oversized “granny” sunglasses that made her look like she was playing some sort of virtual reality game, sat my mom…Alice. The smile on her face stretched across the room and I am certain was matched only by the identical one on my face. My heart swelled with a pride and love that only a son could muster. I had dreamed of this moment since before I launched and had prayed that she would be strong enough to be there when I returned to Earth. You see, my Mom had been bravely battling lung cancer since just before I was announced to fly to the International Space Station last April. We held each other tightly, and she said that she was better now. She told me that what she really wanted was to touch me and hold my hand, and that in doing so, she would know that I was real to her again and back safely upon the Earth.

Mom lost her fight on December 13, 2007…just a little more than a month after we saw each other for what turned out to be the last time. Now, I listen often to a phone message she left me a few days after our meeting in Florida. She had just called to tell me “…welcome back.” Thanks Mom…for everything…I miss you.
› Back To Top