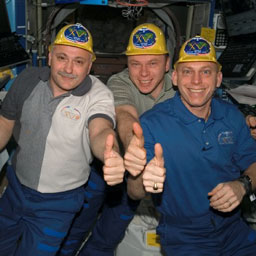 I am going to miss them. Expedition 15 Commander Fyodor Yurchikhin and Soyuz Commander and Flight Engineer 1 Oleg Kotov departed the International Space Station (ISS) today for Earth. After a successful undocking and reentry of their Soyuz craft, they are now safely on the ground, reunited with their families and basking in the glow of a job truly well done! Having been here since last April, their time (6 months) had passed and they were ready to return. They were wonderful crewmates and we worked together extremely well, accomplishing all of the goals set forth for our increment.

As for me, I remain on board as the “sole survivor” of Expedition 15! Maybe I’ll win a million dollars and be on TV or something?! The latest Soyuz docking brought me my new crewmates: Commander Peggy Whitson, from Iowa, and Flight Engineer 1 Yuri Malenchenko of Russia. Together, we now form the first of many versions of the 16th expedition to the ISS.

I maintain the position of Flight Engineer 2, at least for a little while longer. I will be “relieved of duty” soon, when Discovery arrives with the STS-120 crew. Dan Tani will be my replacement and will assume my ISS role once our Soyuz “seat liners” are swapped out. At that moment, I become a Shuttle crew member, ready to return with STS-120. A Shuttle and spacewalking veteran, Dan is making his second flight into space and will become the second of four “Flight Engineer 2’s” for this expedition. During the 6-month “reign” of Commander Whitson, several crews will visit the ISS, providing her with a new Station crew member each time. Designated as “ShRECs (Shuttle rotating expedition crew members),” these astronauts are “tied” to specific pieces of ISS hardware, allowing them to be more familiar with their installation and operation. Suni Williams, the first ShREC, had the P5 truss and I had the S5 truss. Dan has the P6 truss and Node 2, while the next ShRECs, Leopold Eyharts (European Space Agency [ESA], French astronaut) and Garrett Reisman (New Jersey) are “tied” to the Columbus Module (ESA) and the Japanese Experiment Module (JEM) Logistics Platform (JLP), respectively. Expedition 16 has become affectionately known as “Peggy and the seven dwarfs!”

These are sure to be exciting times for Peggy and her crews on the ISS. Many new modules (3 to be exact: Node 2, Columbus and JEM) and visiting vehicles (several Progress cargo “tugs” and ESA’s Automated Transfer Vehicle [ATV]) will make for tremendous activity and a busy increment, while increasing the internal volume of the Station by almost 40%! The time will literally fly by, I’m sure. Peggy is a veteran of the ISS having spent almost 6 months onboard as a member of the Expedition 5 crew. A native Iowan, we have had a lot of fun so far talking with the media from our childhood homes in the Midwest. I try to get a lot of mileage out of the fact that we are both from the Heartland, and I love telling everyone that we Nebraskans consider Iowa to be “far Eastern Nebraska”! Since Russian dignitaries gave her the launch gift of a couple of Kazakh riding whips to “…keep the men in line” on her crews, I was a bit worried that she may have a new and unique “management style”! Fortunately for Yuri and me, she left them both at home! Whew, thank goodness! So far she has been a wonderful commander, sharing her wealth of knowledge and experience. She has a great sense of humor and we are enjoying our time together!

My time onboard is ticking down. It has been a wonderful adventure for me…something I will never forget. Thanks for flying with me. ”Live long and prosper!”
› Back To Top