Wow! It’s almost time for me to go home. Where did the time go? It is hard for me to believe that I am preparing to return to Earth. The time has literally “flown” by (no pun intended!). I have been busier than a “one-armed paper hanger,” which is good, because it seems that I have had no time to be bored or to dwell on feelings of homesickness. So, maybe now…can we reminisce a bit? 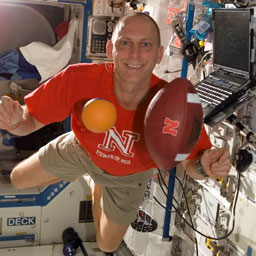 With a June 8th launch on STS-117 and the Space Shuttle Atlantis, our adventure began. The addition of a new truss segment and 4 space walks to, among other things, “shake” down a sticky folding solar array, highlighted my first two weeks in space. We were not without some drama either, when the entire set of 6 Russian computers failed simultaneously due to the huge influx of electrical power that our newly delivered solar array provided. Then, with a quick 7 days of Station adaptation and hand-over tidbits from Suni Williams, it was my “turn” to become the “specialist” of the American segment of the International Space Station (ISS).

Activities began quickly with preparations for my first EVA and the third EVA of the increment, Expedition 15. Exiting and re-entering the hatch to the tune of 7 hours and 41 minutes of hard work and the tossing out of some “trash” (which became known as satellites “Nebraska 1” and “Nebraska 2”!), put us right back in the midst of preparations for our first visitors…the crew of Endeavour and STS-118.

A planned 14-day mission was shortened to 11 by the wrath of Hurricane Dean. But not before we were able to attach another new piece of truss called S5, a stowage platform for spare parts (ESP3) and replace a failed control moment gyroscope as we clicked off 4 more spacewalks; two of which I had the privilege of performing with the Space Shuttle crew. Now with more than 19 hours of space walking time, I said goodbye to my friends and pressed ahead with the next key ISS milestone of Expedition 15, moving the Pressurized Mating Adapter (PMA) 3.

The robotic arm and all of its capability were center stage as we lifted this critical piece of hardware off of its “home base” (for the last 8 years or so) and moved it to its new spot on the bottom of the ISS. Now, it is out of the way so that Node 2, dubbed Harmony, can be installed this month and soon after the modules from our Japanese and European partners! The arm performed flawlessly as did the attachment hardware for PMA 3, so we celebrated with the ground and life was good!

We are now prepping for the arrival of the next ISS crew via a Russian Soyuz rocket…and the start of Expedition 16. Rest assured that over all this time we were also doing other cool stuff, like generating oxygen from water for the first time in the American segment! We performed experiments in plant (and worm!) growth, atmospheric composition monitoring, astronaut health and nutrition analysis and the burning of substances to help us figure out how to make better smoke detectors. Oh…did I mention that during all of this I have taken over 17,000 photographs and exercised for 2-3 hours every single day? Whew…what an increment!!! I get tired just thinking about it! I wouldn’t trade a minute of it! But you know, I think the most exciting time for me is yet to come with the arrival of the Space Shuttle Discovery. A challenging mission…the attaching of Harmony, a solar array to move to its new home and 5, count ‘em, 5 space walks! Oh yeah…I almost forgot…my ride home!
› Back To Top