How many different types of vehicles have you ridden in during your lifetime? I would guess various models of cars, trucks, planes, buses, and a train perhaps? Maybe even a hot air balloon!?? Well, I have added to my spacefaring total after yesterday! After launching on the Space Shuttle Atlantis, I have been “riding” on the International Space Station (ISS) since June 10, 2007. With my return scheduled on the Space Shuttle Discovery and considering the fact that I spent time in the Space Shuttle Endeavour while she was docked during STS-118, I have covered everything the United States Space Program currently has to offer. I even have time in all of the NASA T-38 jets and other assorted aircraft! Yet, yesterday perhaps, was likely to be the most interesting trip of all…a flight on the Russian Soyuz vehicle called Soyuz Транспортны Корабля 14 (“Trans port nee Ko rab al ya”). Not exactly straight off the showroom floor, but I sort of consider it a “test drive” of sorts! Maybe a short jaunt “around the block!” 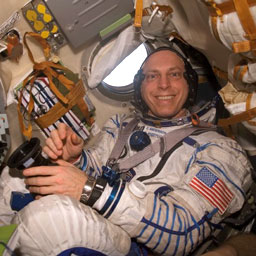 As we discussed briefly in Chapter 8 (Wow, that sounds “official” doesn’t it? Kind of like a homework assignment!), the Soyuz is a critical part of the ISS…it is our steady and reliable lifeboat, ready to carry us to Earth in the event of a serious problem. Of course it is used primarily to ferry crews to and from the ISS, sort of like a taxicab, but for me, since I arrived and will leave via the Space Shuttle, its capacity as a rescue craft is paramount. Yep…it’s all about safety up here, and giving us as many options for success as humanly possible…and the Soyuz is the key.

Some have asked why I didn’t stay onboard ISS to “keep her going” while my crewmates Fyodor and Oleg “ran down to the store for a carton of milk!” Well, if I were to stay onboard station, while they moved the Soyuz, I would be stuck inside and all alone (except for my friends on the ground of course!) if for some strange reason they were not able to re-dock. In that case, without the ability to re-dock and come back inside the ISS, they would have to return to Earth. So, everyone must go together, such that no one is left onboard alone. You could survive by yourself, but it would be a struggle and pretty darned lonely! 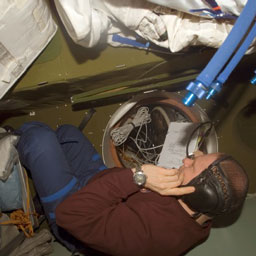 It was a cool ride, but for a guy of my size (6 feet tall on Earth, about 6 feet 2 inches in space!) it's tough. I like to relate it to kids by having them imagine 3 fully grown adults, sitting in a well known compact car named for a “bug”, with a moon roof. The moon roof is open, leading to a telephone booth-sized compartment that sits on top. You "live" in the telephone booth...that's where you eat, sleep, change clothes and go potty...all three of you. That’s where all of your “daily life” equipment is stored as well. When it's time to "go somewhere," everyone puts on their “traveling clothes (spacesuits!),” climbs down into the “car,” and gets comfortable; as comfortable as possible with three adults and everyone in the “front seat,” in bulky spacesuits! The “backseat” is stuffed with more equipment to make the “car” run smoothly and to perform various functions like keeping the air clean and providing air conditioning to keep you cool. You also stow your survival gear there, in case you accidentally land in the desert, swamp, mountains, ocean/sea/lake or snow packed fields and forests. The "kicker" is that you have to sit with your knees up in your chest, kind of curled up like a ball for up to 3 hours! It’s kind of like when you pack up your car with all of your stuff to head off for your freshman year of college! Not something you want to do every day, that’s for sure!