I am indeed a very lucky man. Not because I am in space, living onboard the International Space Station (ISS), whizzing around our beautiful planet at 17,500 miles an hour and enjoying the views of a lifetime. Not because I have been fortunate enough to participate in three spacewalks and “fly” the impressive Robotic Manipulator Canadarm2 to carry massive pieces of the Station from one place to another. No…I am a lucky man because I have the finest “support staff” known to humankind. That’s right…I have the legendary Mission Control Center (MCC)! Together, we form a team that’s pretty hard to beat!

Living onboard the ISS is a privilege. It is “received” by a relatively small number of people on our entire planet. For me to be living this privilege is indeed an honor and humbling experience. Yet, this is not about me or the astronauts and cosmonauts who fly on spacefaring vehicles. We are just the tip of an enormous iceberg. This is about the team that is formed between the crew members and the huge ground support network that Fyodor, Oleg and I so casually refer to as TsUP (“tsoup”) or MCC or the POCC (“pock”). Currently, we have functioning control centers in Houston, Moscow and Huntsville, Alabama. They are the “leads” for U.S., Russian and payload operations. Very soon, we will also “bring to life” control centers in Germany, France, Canada, and Japan. Each of these centers, staffed with highly trained professionals will have duties and obligations to their portion of the Station. We are pretty well versed about Houston and Moscow…they have been in this since the inception of the Station operations, way back in 1998. But what about the others; the “new kids in town?” Well, the next critical steps happen pretty fast. The European Automated Transfer Vehicle (ATV) will be controlled from Toulouse, France. This larger and more capable cargo carrying spacecraft will supplement the Shuttle and Progress vehicles to make deliveries of critical supplies to the Station. Within the next year we should also be welcoming new scientific laboratory modules…“Columbus” from the European Space Agency (ESA) and “Kibo” (“Hope”) from the Japan Aerospace Exploration Agency (JAXA). They will be controlled from Cologne, Germany, and Tsukuba (“tscuba”), Japan, respectively. Then, our longtime spacefaring partner Canada, will bring the latest addition in robotic technology to bear; the Special Purpose Dexterous Manipulator (SPDM), controlled from Montreal, Canada (and Houston as well). With Houston at the helm, and the lead flight director in control, the team will perform as a well rehearsed orchestra, achieving crescendos with their hardware at just the right moment! 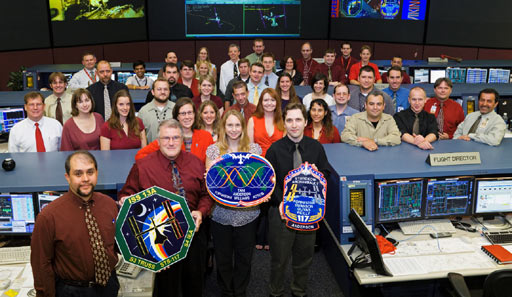 The people of the MCC who keep us safe onboard are a very diverse group. They are extremely intelligent, highly motivated and they are some of the most dedicated folks that I have ever had the privilege to meet. Working shifts to provide around the clock coverage, they range from eight to nine hours during the week to 14 hours on the weekends. With smiles and confidence, they assume the identity of the Orbit 1, Orbit 2 or Orbit 3/planning shift teams. Oftentimes they finish their shift only to return to their offices to support technical meetings or dig for “more data” to help out the crew or solve a critical problem. They come from all backgrounds, all races. Some are fresh out of college, others are “grizzled veterans” with years of valuable spaceflight operational experience. They are single, they are married, some have children and some do not. They are aunts, uncles, brothers and sisters. They are the best and brightest that our world has to offer; and most importantly, they are my friends.

Copy all Houston…and thanks!
› Back To Top