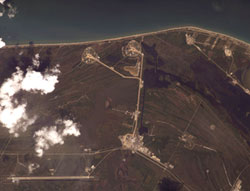 Image to right: Kennedy Space Center and Cape Canaveral, Florida are featured in this image photographed by an Expedition 15 crewmember on the International Space Station. Launch complex 39, with pads A and B are visible at top center. The Vehicle Assembly Building (VAB) is visible near center. The Shuttle Landing Facility appears as a long thin strip just below center. Image credit: NASA

One of my ground-based journal chapters speculated on what life in space might really be like. At that time, I honestly had no idea, but I promised my dedicated readers that I would find out…and soon! Well, there’s no time like the present, I always say (or at least someone always says that!).

Our average days are a bit longer in terms of work. On Monday through Friday we awaken at 0600 (military time for 6 a.m.!)…but that time is based on “Zulu” or “Greenwich Mean Time (GMT)” time. That means we are about 3 hours behind Moscow and about 6 hours (depending on the time of year) ahead of Houston (and Nebraska!). Sleep is scheduled for 2130 (9:30 p.m.) GMT. So, if we are good boys and go to bed on time, we should get about 8.5 hours of sleep. Like that’s gonna happen! I am so far behind at this point, I usually work about an hour into the sleep period catching up on e-mail and reading what I am supposed to do the next morning. Once I get into a rhythm, though, things should smooth out and I will hopefully be able to stick to the schedule. 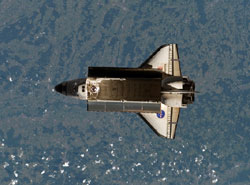 Image to left: Backdropped over a colorful Earth, Space Shuttle Atlantis is featured in this image photographed by an Expedition 15 crewmember after the shuttle undocked from the International Space Station at 9:42 a.m. (CDT), June 19, 2007. Image credit: NASA

We, “The Three Musketeers,” eat breakfast, lunch and dinner…typically together. Fyodor and Oleg seem to like American food, while right now, I am a bit partial to some of their Russian dishes. It will be interesting to see how that will change with time. We have drinks (juices, tea, coffee, water), main courses (meat, fish, lamb), sides (veggies, breads) and desserts. I have enjoyed chocolate pudding cake twice in the last week! Some of it is “heat and eat,” while other dishes require you to add warm or hot water (there is no cold water on board) to the package, wait a few minutes and enjoy! We do get special “bonus” containers and goodies sent from our loved ones, like chocolates, special beverages and snacks. Those are usually quite the treat! My favorite so far has been a famous “sandwich cookie.” 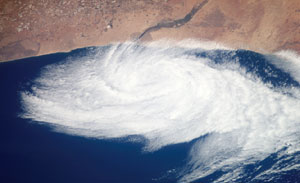 Image to right: This nadir view from the International Space Station, photographed at 11:43 GMT on June 26, 2007, shows a weak low pressure system off the coast of Morocco, just south of Agadir (out of frame), near the Oued Massa River at about 30 degrees north latitude and 9.5 degrees west longitude. Such a weather system can be caused either by the winds forming an eddy due to some land feature or a heat low has drifted off the coast. Image credit: NASA
Potty ops are quite interesting. We do it just like you do on the ground, but we use a vacuum hose. Your ability to aim and the level of subsequent clean-up are directly linked in all aspects; and the amount of hose suction is critical! You get the idea, right? And you sure don’t want to leave a mess for the next guy! That would not go over very well.

My days are typically spent performing experiments (this morning I collected my own blood; yep, all by myself!), performing maintenance on various systems or components (e.g., today I discharged batteries for our spacewalking suits to maximize their ability to hold a charge for our July spacewalk!), exercising and taking photos of the Earth. We exercise for about 2 hours every single day, using a treadmill, a stationary bike or a resistive exercise device (similar to those you see advertised on TV). I look forward to exercising because I sweat and that makes me feel like I am doing something as if I were on Earth. Post exercise showers are a bit of a challenge. I would say they are more like a sponge bath than a shower. We have rinse-less soap, rinse-less shampoo, toothpaste and shaving cream…all the necessities. You carefully add water to your body (surface tension keeps it right there!), then rub it around gently with the soap, rinse it off with a towel, and voila! You’re clean (sort of) again. You don’t want to be too vigorous, as the water and soap fly away. But even that’s allowed, as we will recycle it and use it later to re-hydrate our food! 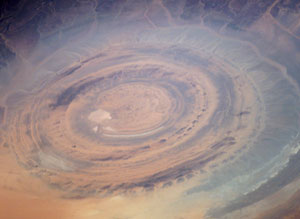 Image to left: The "bull's-eye" of the Richat Structure in the barren Gres de Chinguetti Plateau, central Mauritania in northwest Africa is featured in this image photographed by an Expedition 15 crewmember on the International Space Station. It represents domally uplifted, layered (sedimentary) rocks that have been eroded by water and wind into the present shape. The 25-mile-wide structure is a 300-foot-deep landmark that has caught the eye of many an astronaut in Earth orbit. Image credit: NASA

When bedtime finally rolls around, I “fly” into my sleeping bag that is hanging on a wall in my “room.” My room is about the size of a telephone booth and it has a small light and mirror and lots and lots of Velcro. When I am sleeping, my hands float out in front of me and I just sort of hang there. I don’t need a pillow and it’s really amazing how my brain now makes me think I am lying down in a bed when I am really not. The body is truly an amazing thing; and right now, it is telling me that I need to go to sleep. Goodnight, everyone!
› Back To Top