The station's 26th Progress unpiloted spacecraft brings to the orbiting laboratory almost 1,600 pounds of propellant, more than 100 pounds of air and oxygen, more than 465 pounds of water and 2,954 pounds of dry cargo. Total cargo weight is 5,111 pounds. 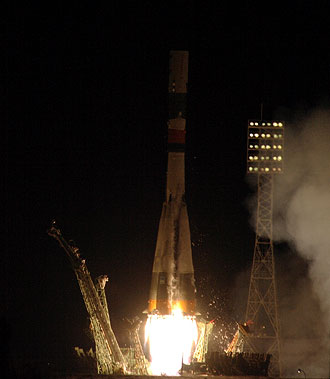 Image at right: The ISS Progress 26 cargo craft lifts off from the pad at the Baikonur Cosmodrome in Kazakhstan on August 2, 2007. Image credit: NASA/Mark Bowman

Among the dry cargo are spares for Russian computers that had problems during the STS-117 mission of Atlantis to the station in June.

P26 launched from the Baikonur Cosmodrome in Kazakhstan on Thursday, Aug. 2, at 1:34 p.m. EDT. It replaces the trash-filled P24 which was undocked from Pirs Wednesday and deorbited for destruction on re-entry.

The spacecraft used the automated Kurs system to dock to the station. Expedition 15 Commander Fyodor Yurchikhin was at the manual TORU docking system controls, should his intervention have become necessary.

Once Expedition 15 crew members, Yurchikhin and flight engineers Oleg Kotov and Clay Anderson, have unloaded the cargo, P26 will be filled with trash and station discards. It will be undocked from the station with its load of trash and deorbited, to burn in the Earth's atmosphere.