Grow Text SizeShrink Text Size
Progress Docks to Space Station
A Progress freighter with more than 2.5 tons of fuel, air, water and other supplies and equipment aboard docked with the International Space Station at 1:10 a.m. EDT Tuesday.

The station's 25th Progress unpiloted cargo carrier brings to the orbiting laboratory more than 1,050 pounds of propellant, almost 100 pounds of air, more than 925 pounds of water and 3,042 pounds of dry cargo – a total of 5,125 pounds. 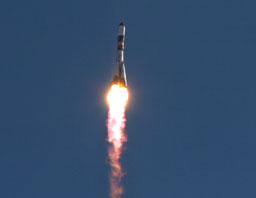 P25 launched from the Baikonur Cosmodrome in Kazakhstan at 11:25 p.m. Friday.

The spacecraft used the automated Kurs system to dock at the aft port of the Zvezda Service Module. Expedition 15 Commander Fyodor Yurchikhin stood by at the manual Toru docking system controls, had his intervention become necessary.

Expedition 15 crew members, Yurchikhin and flight engineers Sunita Williams and Oleg Kotov, will continue to use oxygen from the Progress 24 at the Pirs Docking Compartment. It is scheduled to remain there until mid-August.

Once its cargo is unloaded, the new P25 will be filled with trash and station discards. It is scheduled to be undocked, deorbited and incinerated on re-entry on July 20.

But the second of the three Progress sections is a refueling module, and the third, uppermost as the Progress sits on the launch pad, is a cargo module. On the Soyuz, the descent module, where the crew is seated on launch and which returns them to Earth, is the middle module and the third is called the orbital module.