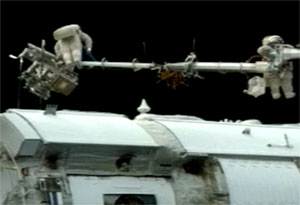 Image to right: Flight Engineer Oleg Kotov (left) rides on the end of the Strela crane with a bundle of debris panels as Commander Fyodor Yurchikhin operates the controls. Image credit: NASA TV

Additional SMDP panels will be installed on Zvezda during a second spacewalk by the cosmonauts, Commander Fyodor Yurchikhin and Flight Engineer Oleg Kotov, on June 6. During that spacewalk they also will install a section of an Ethernet cable on the Zarya module and a Russian experiment called Biorisk on Pirs.

Yurchikhin, the lead spacewalker, EV1, and Kotov, EV2, wore Russian Orlan spacesuits. It was the first spacewalk for both.

After leaving the Pirs airlock at 3:05 p.m. EDT, the spacewalkers moved to the Strela 2, one of the hand-operated cranes at the base of Pirs. They attached an extension to the Strela boom. With Kotov on the end of the extension, Yurchikhin extended the boom to a point over Pressurized Mating Adaptor 3 (PMA-3), on the Unity Node, a distance of about 60 feet. 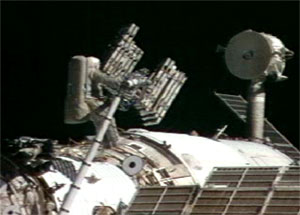 Yurchikhin, with guidance from Kotov, maneuvered the Strela end effector to a grapple fixture on the SMDP Adaptor, a stowage rack. It is attached to PMA-3 and held three bundles of SMDP panels, a total of 17 of them. The assembly has been dubbed the "Christmas Tree."

Once the Christmas Tree was attached to Strela and released from PMA-3, Yurchikhin moved it and Kotov back to the small diameter of Zvezda. Yurchikhin joined Kotov there, and together they secured it to a grapple fixture on Zvezda.

They then left the SMDP task and moved aft on Zvezda's large diameter. There they rerouted a cable for a Global Positioning System to be used with the European Automated Transfer Vehicle (ATV). The ATV is an unpiloted cargo carrier with almost twice the capacity of the Progress cargo craft. It is scheduled to make its first launch later this year.

That done, they moved back to the Christmas Tree on the forward end of Zvezda, where they removed and opened one of the three bundles of debris panels. That bundle, No. 4, held five panels. The aluminum panels vary in size but are about an inch thick. They typically measure about 2 by 3 feet and weigh 15 to 20 pounds.

Yurchikhin and Kotov installed the five panels on Zvezda's conical section, the area between Zvezda's large and small diameters.

Six SMDPs from bundle No. 1 were installed during an Aug. 16, 2002, spacewalk by Expedition 5 Commander Valery Korzun and Flight Engineer Peggy Whitson. Those SMDPs were delivered to the station by Endeavour during STS-111 in June 2002.

The remaining three bundles and their adaptor were delivered by Discovery during STS-116 last December and attached to PMA-3 by spacewalkers Bob Curbeam and Sunita Williams. Williams was intravehicular officer for Wednesday's spacewalk, advising and keeping the spacewalkers on schedule.

After the installation task, the spacewalkers moved back to Pirs and into the airlock. Hatch closure marking the end of the spacewalk was at 8:30 p.m.
› Back To Top