The spacewalk from the Quest Airlock ended at 2:06 p.m. EDT. 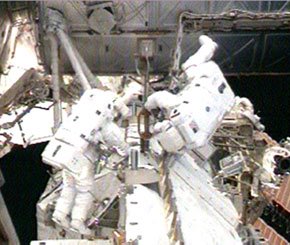 After leaving the airlock and setting up equipment, the first task was installation of a television camera stanchion. The spacewalkers took it from an external stowage platform and installed it on the Earth-facing side of the station's main truss at the interface Starboard 0-Port 1 (S0-P1) truss segments.

Next they moved to separate tasks. Anderson reconfigured a power supply for an S-Band Antenna Assembly, and then set up and got on a foot restraint at the end of Canadarm2. Yurchikhin replaced a circuit breaker, called a remote power controller module. It ensures power redundancy for a move of the Mobile Transporter rail car on the station's truss.

Back together, Anderson and Yurchikhin removed flight support equipment, where the camera stanchion had been mounted, and an attached Flight Releasable Attachment Mechanism. Together they have a mass of about 212 pounds.

While Anderson jettisoned them from the end of the arm, Yurchikhin moved to the Z1 truss, where he disconnected and stowed cabling associated with the ammonia reservoir, called the Early Ammonia Servicer (EAS).

The EAS was installed on the P6 truss during STS-105 in August 2001, as an ammonia replenishment reservoir if a leak had occurred. It was never used, and was no longer needed after the permanent cooling system was activated last December. The EAS has to be removed before the P6 truss can be moved to the end of the station's main truss. 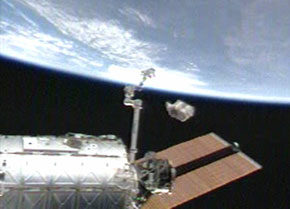 With Anderson still on the arm, both crew members moved to the P6 Truss and released the reservoir's remaining connections to the station. Once it was free, Anderson held the EAS while the arm maneuvered him to the jettison point, below the right side of the ISS main truss.

The EAS weighs a little over 1,400 pounds on Earth. The jettison was much like that of the stanchion equipment. Anderson shoved the EAS opposite the station's direction of travel.

A subsequent reboost by Russian thrusters changes the station's orbit to provide clearance from the EAS. The reboost also prepares for the Aug. 2 launch of the Progress 26 cargo carrier and the Aug. 7 launch of Endeavour to the station.

The final scheduled spacewalk task was cleaning the Earth-facing docking port, or Common Berthing Mechanism (CBM) of the Unity node. That was done to prepare for the relocation of Pressurized Mating Adapter-3 (PMA-3), scheduled for late August.

The move is being made to clear the PMA-3's present position, on the starboard CBM of Unity, for a series of events that will culminate with the arrival of the Harmony node and its preparation to receive future space shuttles.

Crew members completed three get-ahead tasks. They removed an auxiliary equipment bag from the P6 Truss and attached it to the Z1 Truss. They also removed a malfunctioning Global Positioning System antenna on the S0 Truss and released bolts on two fluid trays attached to the S0. The trays are to be installed on Node 2, the Harmony node, during STS-120 this fall.