Grow Text SizeShrink Text Size
Expedition 14 Back on Earth
Commander Mike Lopez-Alegria and Flight Engineer Mikhail Tyurin, the 14th crew of the International Space Station, landed safely in their Soyuz spacecraft Saturday at 8:31 EDT in the steppes of Kazakhstan.

The landing was delayed a day and moved farther south because wet ground at the initial site precluded helicopter operations there.

With Expedition 14 was Spaceflight Participant Charles Simonyi, an American and founder of his own computer software company, who flew to the space station with the Expedition 15 crew and spent about 12 days aboard. He was on the station under a contract with the Russian Federal Space Agency. 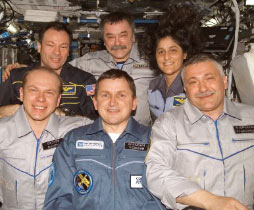 Lopez-Alegria is a veteran of three previous spaceflights on the space shuttle, including two missions to the station, where he did five spacewalks. Tyurin spent 125 days aboard the station as a member of the Expedition 3 crew between August and December 2001. They launched Sept. 18 in the Soyuz that brought them home and arrived at the station Sept. 20.

He also set a U.S. record for a single spaceflight's duration more than 215 days.

E14 welcomed the shuttle Discovery on its STS-116 mission. Discovery brought to the station the Port 5 truss segment with its new solar arrays and more than two tons of other equipment and supplies. It also brought Williams and took home Thomas Reiter, the European Space Agency astronaut who served with the latter part of Expedition 13 and the early part of E14.

Before closing the Soyuz-station hatches at 2:03 a.m. Saturday, Lopez-Alegria and Tyurin said farewell to the E15 crew, Commander Fyodor Yurchikhin, Flight Engineer Oleg Kotov and Williams, the astronaut who served on the station during the latter part of E14 and remains for the first part of E15. Yurchikhin and Kotov launched from the Baikonur Cosmodrome on April 7 at 1:31 p.m.

Back on the space station, the E15 crew began the solo portion of its six-month increment.

Yurchikhin, 48, is making his second flight into space. He was a member of the STS-112 crew which launched to the station aboard Atlantis on Oct. 7, 2002, with the Starboard 1 Truss. He holds a Ph.D. in economics and was named a cosmonaut-candidate in 1997.

Kotov, 41, is making his first spaceflight. He graduated from the Moscow Medical Academy in 1988, and was named a cosmonaut-candidate in 1996.

Williams, 41, is a Naval Academy graduate and a Navy commander. She flew helicopters and was a helicopter test pilot before being selected as an astronaut in 1998.

Lopez-Alegria and Tyurin will spend several weeks in Star City, near Moscow, for debriefing and medical examinations.