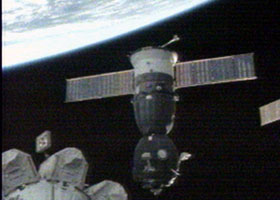 The move, with Tyurin at the controls, was made to clear the Zarya port for the arrival of Expedition 15 Commander Fyodor Yurchikhin and Flight Engineer Oleg Kotov, along with spaceflight participant Charles Simonyi.

Docking their Soyuz to the now-vacant Zarya port after their scheduled April 7 launch will allow them to avoid a relocation move later in their expedition.

The Soyuz docked at the Zvezda docking port at about 6:54 p.m. EDT after a flight of almost 30 minutes. During that time they traveled about a third of the way around the world. On the station, the Soyuz is about 80 feet from where it started.
› Back To Top