The spacewalk included a golf shot that merited a high-flying birdie rating. 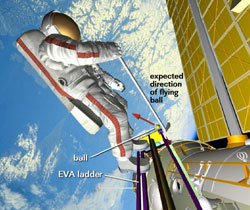 Golf was the first major spacewalk activity. Lopez-Alegria put the tee on the ladder outside Pirs. Tyurin set up a camera and then stepped up and addressed the ball for his one-handed shot. Lopez-Alegria helped secure Tyurin's feet.

The golf was a commercial activity sponsored by a Canadian golf company through a contract with the Russian Federal Space Agency. The ball left the station toward the right side instead of to the rear, a substantial slice.

The ball weighs just 3 grams, a tenth of an ounce or about three times the weight of a dollar bill, compared to 1.62 ounces for a standard golf ball. At that weight it was unlikely to damage any station components if the shot had gone awry. The ball will have a short stay in orbit, perhaps three days.

Inspection of a Kurs antenna on the Progress 23 unpiloted cargo carrier that docked at the aft end of the station's Zvezda Service Module Oct. 26 was the next task. Final latching of the spacecraft to the station was delayed by more than three hours because Mission Control Moscow was not sure the antenna was completely retracted.

Tyurin and Lopez-Alegria moved to the rear of Zvezda and photographed the antenna. It was still fully extended, so Tyurin used a screwdriver to release a latch and tried to retract the antenna. Russian flight controllers also tried to retract it by activating a drive. Neither succeeded, and the task was abandoned.

Next they relocated a WAL antenna, which will guide the unpiloted European cargo carrier to docking with the station. That vehicle, the Automated Transfer Vehicle, is scheduled to make its first flight next year. In its previous position the antenna interfered with a cover for a Zvezda booster engine. 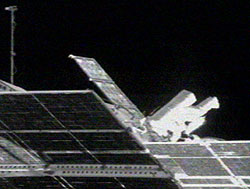 Image to left: The Expedition 14 spacewalkers work on the WAL antenna during the Nov. 22 EVA. Credit: NASA TV

Then the two installed a BTN neutron experiment, which characterizes charged and neutral particles in low Earth orbit. Atop Zvezda, its readings during solar bursts should be of special interest to scientists.

Two thermal covers from the BTN were jettisoned before the spacewalkers returned to the Pirs airlock.

A final scheduled task, an inspection of bolts on one of two Strela hand-operated cranes on the docking compartment, was postponed.

This was the first spacewalk during Expedition 14, the sixth for Lopez-Alegria and the fourth for Tyurin.