It was the last in an unprecedented series of three spacewalks in nine days from the Quest airlock. Major tasks of this spacewalk included removing and jettisoning two large shrouds and installation of attachments for cargo carriers. 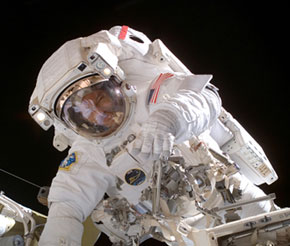 Lopez-Alegria and Williams moved from the airlock out to Crew Equipment Transfer Aid (CETA) carts on the rails of the main truss. Pushing one cart with their equipment, including a foot restraint, they moved to the Port 3 Truss. Their first job was to remove two thermal shrouds on two Rotary Joint Motor Controllers (RJMC) on P3.

Next they removed two large shrouds from P3 Bays 18 and 20. The shrouds, larger than king-size bed sheets, provide thermal shading. With the station in its present orientation, they are no longer needed. They are being removed to avoid trapping heat.

The spacewalkers worked together to fold each into a package a bit smaller than an outdoor garbage can. They jettisoned them toward the rear of the station to starboard and slightly downward.

That shroud task was followed by deployment of an Unpressurized Cargo Carrier Assembly Attachment System (UCCAS) on the upper face of the P3 truss. That was done in preparation for attachment of a cargo carrier during a subsequent shuttle mission.

While Lopez-Alegria finished work on the UCCAS, Williams moved to the end of the P5 truss to remove two launch locks, to prepare for the relocation of the P6 Truss.

The final scheduled task of the spacewalk was connecting four cables of the Station-to-Shuttle Power Transfer System (SSPTS) to Pressurized Mating Adapter-2 (PMA-2) at the forward end of the Destiny laboratory where shuttles dock. The SSPTS will allow visiting shuttles to take power from the station and thus extend their missions.

Lopez-Alegria completed one get-ahead task. He took pictures of the connections on the PMA that provide communications between the station and shuttle while docked and before the hatches are opened.

The three spacewalks from the Quest airlock in U.S. spacesuits and a Russian spacewalk scheduled for Feb. 22 are the most ever done by station crew members during so short a period. They will bring to 10 the total number of spacewalks by Lopez-Alegria, an astronaut record. Williams has a total of four, the most ever by a woman.

Starting from scratch, it takes about 100 crew-member hours to prepare for a spacewalk. By doing them a few days apart, considerable crew time can be saved by not having to repeat some of those preparatory steps.

On Feb. 22, Lopez-Alegria and Tyurin are scheduled to do the Russian spacewalk in Russian Orlan suits from the Pirs airlock. They will work on an antenna of the Progress 23 unpiloted cargo carrier, docked at the aft port of the Zvezda service module.

The antenna did not properly retract when that spacecraft docked in October. The spacewalkers will try to secure or remove the antenna to avoid its interfering with the undocking of P23 in April.
› Back To Top