The first of the three-spacewalk series was successfully completed Jan. 31. The third is scheduled to begin at 9 a.m. next Thursday, Feb. 8. 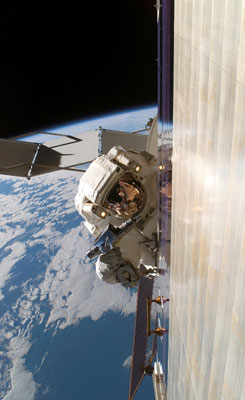 The first parts of the Sunday spacewalk, EVA 7, were similar to the previous one, though crew members seemed to work through the now-familiar tasks more smoothly. Lopez-Alegria and Williams began the second spacewalk by reconfiguring the second of the two cooling loops serving Destiny from the temporary to the permanent system.

Image to right: Flight Engineer Sunita Williams uses a pistol grip tool as she participates in the second of three spacewalks in nine days, as construction continues on the International Space Station. Image credit: NASA

Next they stood by as the ground retracted the aft radiator of the P6. After retraction they installed another set of six cable cinches and two winch bars to secure the radiator and then installed a shroud to cover the radiator.

During the Jan. 31 spacewalk, Lopez-Alegria and Williams removed and reconnected to a rats' nest fitting one of two lines linking the EAS with the old cooling system. Sunday they removed the second line and reconnected its end. Those tasks were to prepare to jettison the EAS this summer.

Lopez-Alegria then photographed the inboard end of the P6 starboard solar wing, in preparation for its retraction during the STS-117 mission in March.

Williams brought tools and cables to the forward end of the lab, where Lopez-Alegria joined her. Together they worked on routing and installation of the Space Shuttle Power Transfer System (SSPTS) cables. They worked to reroute the SSPTS cables, a job begun on EVA 6, which will allow the shuttle to draw power from the station's solar arrays. Three final connections will be made during the Thursday spacewalk.

The get-ahead task completed was removal of a sunshade from a multiplexer-demultiplexer, a data-relay device.

Back in the airlock Lopez-Alegria and Williams did some precautionary decontamination porcedures after a few ammonia flakes were seen early in the spacewalk.

The three spacewalks from the Quest airlock in U.S. spacesuits and a Russian spacewalk scheduled for Feb. 22 are the most ever done by station crew members during a single month. They also will bring to 10 the total number of spacewalks by Lopez-Alegria, an astronaut record. Williams will have a total of four, the most ever by a woman.

Starting from scratch, it takes about 100 crew-member hours to prepare for a spacewalk. By doing them a few days apart, considerable crew time can be saved by not having to repeat some of those preparatory steps.
› Back To Top