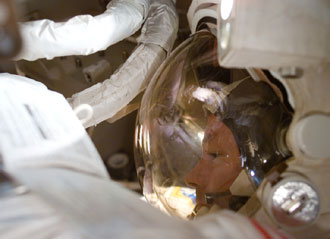 Two other spacewalks from Quest will follow. Lopez-Alegria and Williams are scheduled to make the second spacewalk on Feb. 4 and the third for Feb. 8. The first two focus on the reconfiguration of station power and cooling systems to permanent ones.

Lopez-Alegria, the lead spacewalker wearing the suit with red stripes, and Williams, in the all-white suit, began the tasks of the first spacewalk by reconfiguring one of the two cooling loops serving Destiny from the temporary to the permanent system.

Working at the “rats’ nest,” an area near the base of the Z1 Truss with numerous fluid and electrical connections, Lopez-Alegria reconfigured the fluid loop connections, moving two of the fluid lines from the early system from the lab and connecting them back up to the Z1 panel. That will help enable reactivation of the early cooling system if it should be required. 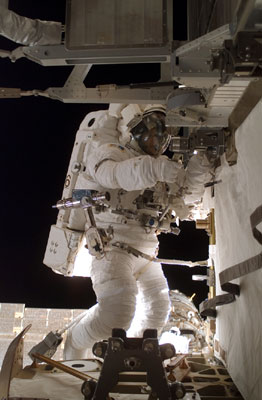 He also connected a cable for the Space Shuttle Power Transfer System (SSPTS). It will allow power from the station’s solar arrays to be transferred to a docked space shuttle, beginning with STS-118 in June.

Next the spacewalkers stood by as the ground retracted the starboard radiator of the P6 Truss. After retraction they installed six cable cinches and two winch bars to secure the radiator and then installed a shroud over it.

The spacewalkers removed one of two fluid lines from the servicer, which will be jettisoned this summer. Because of Wednesday time constraints, the second will be removed on a subsequent spacewalk.

About 25 minutes of the spacewalk was spent in a "bakeout" after crew members had re-entered the airlock. It was done as a precaution to prevent any possibility of ammonia from the fluid lines the spacewalkers had worked with entering the station.

The three spacewalks from the Quest airlock in U.S. spacesuits and a Russian spacewalk scheduled for Feb. 22 are the most ever done by station crew members during a single month. They also will bring to 10 the total number of spacewalks by Lopez-Alegria, an astronaut record. Williams will have a total of four, the most ever by a woman.

Starting from scratch, it takes about 100 crew-member hours to prepare for a spacewalk. By doing spacewalks a few days apart, considerable crew time can be saved by not having to repeat some of those preparatory steps.

+ Read more about the other Expedition 14 spacewalks
› Back To Top