The antenna did not properly retract during the slow final approach of the Progress to the station just before docking Oct. 26. The antenna's retraction ensures that it will not interfere with the Progress undocking in April. 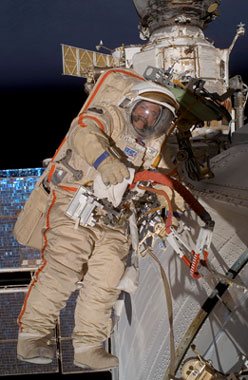 After a brief pause to photograph a Russian satellite navigation antenna and change out a Russian materials experiment, the spacewalkers moved to the back of Zvezda to begin work on the Progress antenna.

Tyurin, who experienced problems with his suit's cooling system and resulting fogging of his visor early in the spacewalk, and Lopez-Alegria first planned to try to release the antenna latch with a punch and hammer. When clearance issues prevented that, they cut struts supporting the antenna.

That enabled them to partly retract the antenna and secure it with wire ties. They reported it had about six inches of clearance from Zvezda, adequate for undocking. Soon after its undocking, the Progress, filled with station discards and trash will be deorbited and burn on re-entry.

Tyurin and Lopez-Alegria completed a number of other tasks during the spacewalk. They inspected and photographed an antenna for the Automated Transfer Vehicle (ATV). The European unpiloted cargo craft has more capacity than the Progress, and is scheduled to make its first trip to the station later this year. The spacewalkers also photographed ATV docking targets.

They photographed a German robotics experiment, inspected, remated and photographed hardware connectors and inspected retention mechanisms and bolted joints on a hand-operated Strela crane that helps transport people and equipment outside Pirs.

Finally, they stowed two foot restraints on a ladder at Pirs before ending the spacewalk.

The spacewalk, from the Pirs docking compartment in Russian Orlan suits, ended at 11:45 a.m. EST. It was the 81st for station assembly and maintenance, the 53rd from the station, the 20th from Pirs and the fifth for this station crew. It was the 10th for Lopez-Alegria, a U.S. record, and the fifth for Tyurin.
› Back To Top