With Tyurin at the controls, their Soyuz TMA-9 spacecraft docked smoothly at the aft port of the Zvezeda service module. They launched from the Baikonur Cosmodrome in Kazakhstan early Monday. 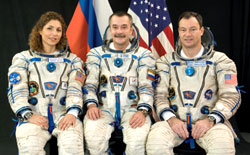 With them was American Anousheh Ansari, the first female spaceflight participant to visit the station. She is flying under contract with the Russian Federal Space Agency.

She will return to Earth with the Expedition 13 crew, Commander Pavel Vinogradov and NASA Science Officer Jeff Williams, who welcomed the new arrivals, Sept. 28. Expedition 13 launched to the station on March 30.

The new crewmen also were greeted by the third Expedition 14 crew member, European Space Agency astronaut Thomas Reiter of Germany. Reiter arrived at the station aboard Discovery on the STS-121 mission in July.

Reiter joined Expedition 13, bringing the number of station crew members to three for the first time since May 2003. He will remain on board as a member of the Expedition 14 crew.

Lopez-Alegria, 45, is making his fourth flight into space. He flew three space shuttle missions. On Expedition 14, he also will serve as NASA science officer. 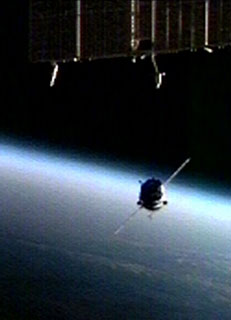 Tyurin, 46, is making his second spaceflight. He served as a member of the station's Expedition 3 crew in 2001, which launched in August and landed in December. He is the second long-duration crew member to be assigned to a second station expedition. Cosmonaut Sergei Krikalev was a member of the Expedition 1 and Expedition 11 station crews.

Reiter is the first European Space Agency astronaut to serve as a long-duration International Space Station crew member. His presence for the first part of Expedition 14 will be valuable for his new crewmates because of his knowledge of the station and its systems. Previous oncoming crews have relied on intense handovers of just over a week with the predecessor crew members before taking over station operations themselves.

Reiter, who served as a crew member on the Russian space station Mir for six months in 1995, is scheduled to return to Earth aboard Discovery on STS-116 in December.

Discovery will bring Astronaut Sunita Williams to the station to replace Reiter and join Expedition 14 in progress. Williams, 41, a Navy commander, will be making her first spaceflight. She is scheduled to remain on the station until next spring.

Discovery also will bring the P5 truss to the station. While it is docked, station and shuttle crews will reconfigure the orbiting laboratory's electrical system and activate the new solar arrays brought up by Atlantis on STS-115.

Expedition 14 will do as many as four spacewalks, perhaps three in January in U.S. spacesuits, relating to station assembly. The other would be done earlier in Russian spacesuits to retrieve and install experiments.

Two Expedition 15 crew members are expected to arrive next spring to replace Lopez-Alegria and Tyurin.
› Back To Top