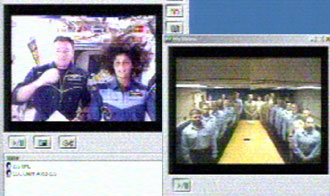 A special re-enlistment ceremony was held on Jan. 29 for 16 Navy sailors aboard the USS Dwight D. Eisenhower. The reenlistment oath was read by a fellow sailor, but one on a very different ship: the International Space Station.

Expedition 14 Commander and Navy Capt. Michael Lopez-Alegria, assisted by Flight Engineer and Navy Cmdr. Suni Williams, conducted the long-distance ceremony from the space station, which was flying about 220 miles above the southern Indian Ocean at the time.

“Your devotion to your shipmates, to the Navy and to our country is deeply appreciated,” said Lopez-Alegria just before beginning the oath. Afterwards, he and Williams could be seen clapping and smiling.

In another NASA connection, one of the re-enlisting servicemen, Chief Petty Officer Thomas C. Peck, has two brothers who work at Johnson Space Center: Boeing’s Donald Peck and Mission Operations’ Gregory Peck. The brothers watched the event when it was rebroadcast on NASA TV later in the day.

Image to left: Gregory (left) and Donald Peck, both working at Johnson Space Center, watch the NASA TV broadcast of the event -- their brother, Chief Petty Officer Thomas Peck, was one of the re-enlistees. Image credit: NASA

Though far away from the re-enlistees, Williams said that she was pleased to take part in the ceremony.

“It’s truly an honor and a pleasure to be serving alongside you guys,” she said. “The Navy is one big family and we’re just happy to be a part of it.”

“We’re sorry that you can’t float with us up here,” added Lopez-Alegria, “but you’re with us in spirit.”