Grow Text SizeShrink Text Size
The Soyuz Flight to ISS...
Here we are on board the ISS finishing up our 1st month on orbit. Before the details fade any further, let me try to recount the Soyuz experience getting here… 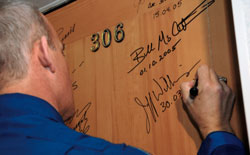 Image to left: Jeff Williams does the traditional signing of a bedroom door at the Cosmonaut Hotel. Photo Credit: NASA/Bill Ingalls

After spending the entire quarantine in Kazakhstan on a normal day’s schedule, the day before launch we were scheduled with a sleep period starting at 1600 (4:00 pm) with a wakeup at 2230 (10:00 pm). That did not work so well for obvious reasons. I spent the first couple of hours completing last minute details and then laid awake for the rest of the time.

After “wakeup,” we underwent final medical checks, took our final shower and went to breakfast. Since the launch was still about 8 hours away I actually ate a substantial amount. Normally, I wouldn’t eat much so as to not have much in the stomach when arriving in weightlessness—the conservative approach.

The “door signing ceremony” came after breakfast. Back at our rooms we gathered with several of the leadership, the flight surgeons, and our families for the traditional event that included a few words and “toasts” from everybody. Then it was down the stairs and out the door to the bus. The sidewalk was lined with launch guests, trainers, staff, and photographers. With the bright light of the cameras it was difficult to see everybody. As soon as we were on the buses, it was off to the Cosmodrome.

At the launch pad… 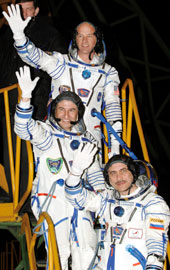 Arriving at the pad gives one the same feeling as the shuttle experience. The hissing and venting of the rocket makes it obvious that it’s fueled and ready to go. The big difference is the presence of many people just a few yards away from the base of the rocket—managers, technicians, media and others calling us by name and wishing us a good flight. We got off the crew bus and reported to the head of the Russian Space Agency (Roscosmos) along with other Russian senior leadership and were walked to the pad elevator with somebody holding each of our arms as we navigated our way in the awkward “Sokol” suits carrying the ventilation fans. We climbed a few steps of stairs, turned around to give the traditional wave and then crowded into a very small elevator for the ride to the top and the ingress hatch.

Ingress was pretty much as expected, made slightly more difficult because of the stowage in both the habitation module and the descent module where we sit, as well as the reality that the spacecraft was the real thing. To get into the left seat, you have to lower yourself down into the center seat, lay down and partially close the hatch, slide carefully over to the left seat and then get into what can be described as the fetal position.

For the next two hours or so, the communication system was checked out, we pressure checked the space suits and the rocket systems were systematically prepared for launch. 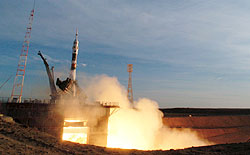 The dynamics of liftoff actually began several seconds before as the engines went through the start-up sequence, with obvious associated vibrations. Liftoff is an obvious kick accompanied by a moderate shake. The “g” level is relatively low at first and gradually builds up to about 4 g’s at the 2-minute point. At that point a couple of significant events occurred which can be rather surprising if you’re not prepared for them. The first was the jettisoning of the launch abort system mounted on the nose of the rocket, which occurred with a moderate bang. A few seconds later, the first staging occurred which resulted in an immediate drop in g-load from 4 to about 1 g. The shaking and vibration continued at a reduced magnitude as we then continued on the second stage. At a little over 2 ½ minutes into the flight, the shroud around the spacecraft was jettisoned with a large “explosion” of pyrotechnics and sudden brightness in the cockpit from sunlight through the newly exposed windows. Then a little over 2 minutes later at just shy of 5 minutes into the flight, the next staging occurred when we went from about 2 ½ g’s, momentarily to zero and then back to about 1 g with the starting of the 3rd stage engine. Going back to 1 g provided the opportunity to cover the window with a shade so that the displays were readable. The ascent continued for a total of just under 9 minutes when the engines shut down and we were weightless.

On orbit checkout and maneuvers… 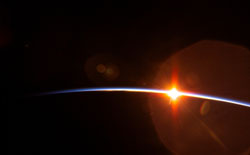 The view from orbit was terrific, of course, but there wouldn’t be much time to enjoy it, at least for a few hours. As soon as we arrived, pressure checks of the spacecraft were required to make sure we didn’t have a leak. Additionally the flight control system was tested to make sure that we could perform the orbit maneuvers, rendezvous and dock with the ISS. Everything checked out perfectly so we continued with the flight plan.

As we conducted the procedures on orbit, the ground control tracked our orbit to determine the exact maneuvers required for rendezvous and adjusted our flight plan accordingly by radio calls every time we flew over the area of Russia. Perhaps the most challenging part of the whole flight was keeping up with all of the numbers called up during those communication passes. Since the passes were short in duration and a lot of critical information was required to be communicated—and all in Russian—it took a lot of concentration to understand and write down the data. 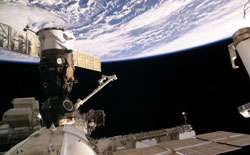 Although small, the spacecraft has all of the essentials for living “comfortably.” Once established on orbit, we were able to get out of our Sokol suits and into regular clothing…as least until the final rendezvous. There was water and plenty of food on board although it had to be eaten at ambient temperatures because there was no way to heat it. We even discovered some fresh apples and oranges, which was a special surprise.

Everybody had a sleeping bag although I only used mine on a couple of brief occasions, and then only when getting a little chilly.

We have three windows in the Soyuz that were used a lot during the free times. The window time gave me a great tan in the face from the reflected light off the earth. When we weren’t flying the vehicle we put it in a solar-oriented inertial spin; that is, spinning at about 3 degrees/second with the solar arrays pointed at the sun. That meant that the out-the-window view was a sweep of the earth every 2 minutes or so. It also produced some unique motion sensations. You could actually “lie down” on the upper hatch of the habitation module and be held there by the slight centrifugal force of the spin. It also meant that everything untethered would tend to float toward the top. I used this unique situation to sleep by tying a loop around my index finger and “hanging” upside down, actually sleeping while hanging from my finger. It was a very stable position and I rested well. 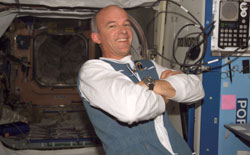 Image to right: Jeff Williams poses for a photo soon after his arrival. Photo Credit: NASA

The final phase of the flight started several hours before docking. We got back in our Sokol suits as a precaution in the event that the docking caused a leak in our Soyuz. Several maneuvers were performed to set us on a path that would intersect the ISS’s orbit. The entire time we had a reading of the range from the station and the closure rate, both steadily decreasing.

Although we trained a great deal for rendezvous failures and manual flying, the automatic system performed perfectly. We approached the station, flew around to align with our docking port (timed to coincide with orbital sun rise), commanded the approach, and smoothly docked to what would be our orbital home for six months.

After a series of pressure integrity checks and getting out of our suits, we were given the “go” to open the hatches. The crew on board was very happy to see us, probably because they wanted the company but also because we were the relief that would allow them to go home to be reunited with their families.

Upon entering the space station, we spent some time visiting our “hosts,” conducted a brief live appearance with Mission Control and then began the process of settling in for the expedition.
› Back To Top